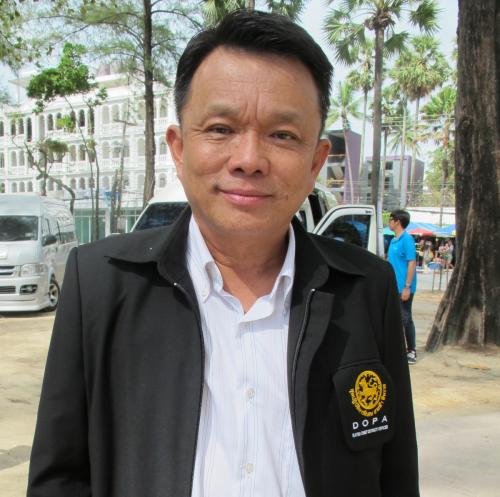 However, in talking with the Phuket Gazette today, he was vague about the details of the complaint filed that led him to dismiss one of Phuket’s most powerful politicians.

“Mayor Pian and other Patong Administrative officials are still in their positions because the order we received from the Office of the Election Commission of Thailand (OECT) in Bangkok has yet to be finalized,” Mr Kittipong confirmed to the Gazette this afternoon.

“The complaint was filed against Mayor Pian and other Patong Administrative officials on September 11 last year, just nine days after the election,” Mr Kittipong stated.

The order to remove Mayor Pian and two other Patong Municipality council members from office has been appealed, Mr Kittipong said.

The decision now rests in the hands of the Court of Appeals Region 8, in Phuket Town.

The OECT order, posted publicly online by Kathu District Chief Veera Kerdsirimongkol on August 10, mandates that Mayor Pian be removed from office and that another election be held.

However, the order did not stipulate a date for the election to be held. It also failed to clarify whether or not Mayor Pian would be allowed to run for re-election.

Mr Kittipong explained that the order from the OECT came well after the election, though election law dictates that any complaint against electoral candidates be filed within 30 days of the election, because the provincial EC office has a full year to investigate any claim.

The election law regarding the complaints applies only to local and provincial politicians throughout Thailand, and does not apply to national politicians, he explained.

Mr Kittipong reviewed, vetted and endorsed the election results and recommended to Bangkok to declare Mr Pian the winner of the election, despite the complaint filed.