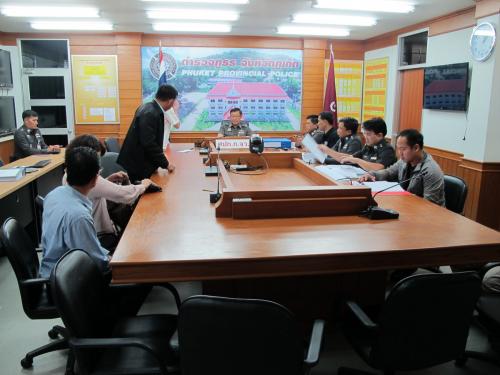 PHUKET: The husband of Jintana Mahattanapak, who was executed waiting at a stoplight on her way home from work, demanded that police reinvigorate their investigation into his wife’s death as the case appeared to have gone cold almost seven months after the event (story here).

Winyoo Mahattanapak, Mrs Jintana’s widower, and other relatives arrived at the Phuket Provincial Police Headquarters early this afternoon to provide additional information to kick-start the investigation.

“There were two places that Jintana devoted her life: her work and the church,” Mr Winyoo said. He asked that police continue to work with those at Jintana’s work place, Hilton Arcadia Phuket Resort & Spa in Karon, to find the killer*.

Police initially believed the motive for the slaying of Mrs Jintana, the Human Resources Director at the Hilton Arcadia Phuket Resort & Spa, involved her being forced to deal with employees caught stealing from the hotel (story here).

“She was a strict person at work. She was straight, and so some employees at the hotel lost their jobs. In a previous incident, she had to fire some employees because they were found cheating their employer. This probably caused her murder,” Phuket Provincial Police Deputy Commander Col Arun Kleawwatee said back in January.

The other lead Mr Winyoo asked police to follow up on was a “suspicious man” who had viewed Mrs Jintana’s body at Vachira Phuket Hospital.

“The man who viewed my wife’s body at the hospital and then rushed away with a nervous face needs to be found,” Mr Winyoo said. “I have already sent the license plate number of the car he was in to police, and it shouldn’t be too hard to capture an image of his face from hospital CCTV cameras.”

Phuket Provincial Police Commander Choti Chavalviwat assured the family that the case was moving along, but that it might still take some time for results.

“We are continuing to investigate the case. However, it may take a long time for our efforts to yield results because we have to go through what evidence we have very carefully,” Maj Gen Choti said. “We will present what information we have to Mrs Jintana’s family and find the suspect as soon as possible.”

The press was then asked to leave the room, so the family members could be briefed on what progress had been made in the investigation.

After leaving the meeting, Mr Winyoo took a moment to speak with the Phuket Gazette.

“I would like to thank all of the police for following up on this case. Today, we came her to cheer them on and encourage them, as we know they are working hard to find justice for my wife,” Mr Winyoo said. “We will follow up with the police in about two weeks. Hopefully they will have more information then.”

* The exact request of Mr Winyoo originally published has been removed by his request so as to not hinder the investigation.

Logging raid finds over 100 rai of damage, no lumberjacks