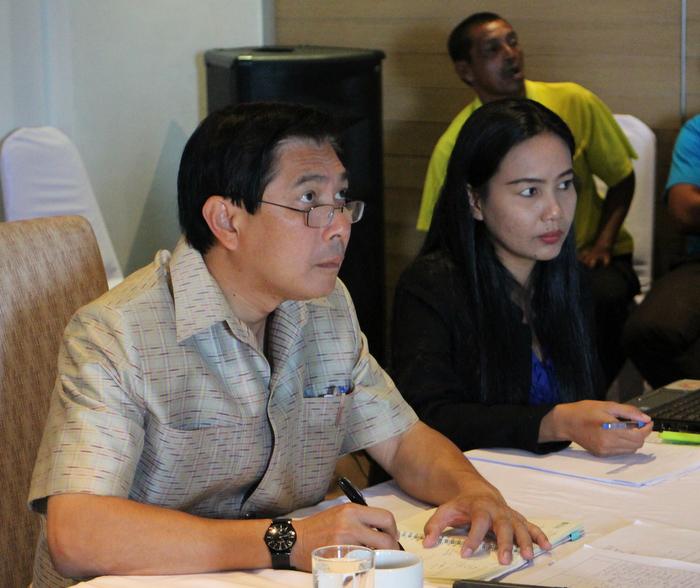 PHUKET: The dredging project to improve access to Koh Kaew marinas, which was halted earlier this month due to environmental concerns, has started again.

The decision to continue with the dredging of the Koh Kaew Canal (story here) was reached yesterday after lengthy discussions among the Phuket Governor, the Phuket Marine Office chief, the local subdistrict chief and Jitti Intaracharoen of the Phuket Farmer’s Council, who led the fight to stop the project.

“We should keep moving forward, and study the negative effects as we go along,” said Koh Kaew subdistrict chief Jedsada Nabnien.

“Since the project has already started, it’s difficult to stop it and there may be negative consequences to abandoning it,” he said.

“Let them continue the project this time, but all the officers and villagers have to consider this as a lesson learned,” he concluded, to rousing applause.

He was supported by Phuket Marine Chief Phuriphat Teerakulpisut, who vowed to pay for any ill-effects of the dredging out of his own pocket.

“If it causes any problems, I will stop it and take full responsibility to pay for any losses,” Chief Phuriphat said.

“But I will not stop the project if the problem hasn’t happened yet.”

The possible problems were outlined by Mr Jitti at the end of April (story here).

Dredging by using a drill to churn up the sea bed decreases oxygen levels in the water and kills aquatic animals, including fish in local people’s traps, and shrimp and fish at bigger farms. It also damages mangroves, Mr Jitti said.

“I have been fighting against this method for 15 years,” he noted.

Mr Jitti did not object to the other dredging method being used in the canal near the marinas, in which a backhoe scoops up sludge from the canal floor and puts it on barges which dump it at sea.

Chief Phuriphat, however, said the backhoe method could not be used in the channel leading from Phang Nga Bay to the marina canal.

“Using a backhoe is too hard to do in the deeper water. We won’t be able to create a level floor on the channel,” he argued.

Phuket Governor Maitri Inthusut called for relevant government officers to discuss the problem and study the negative effects of dredging in order to prevent them in the future.

“I will follow up on this in two months,” Gov Maitri concluded.