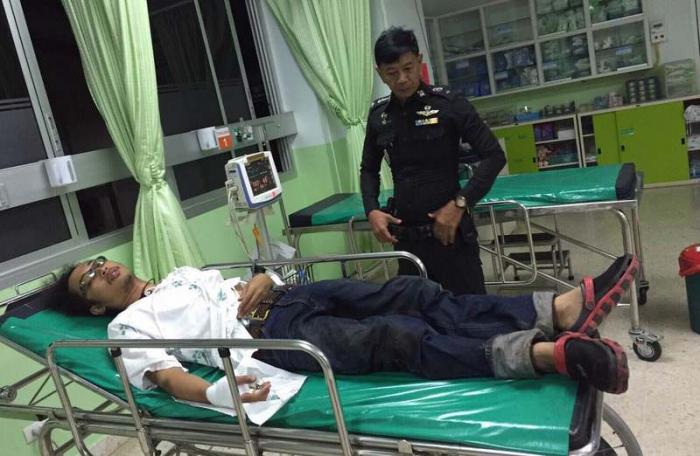 PHUKET: Police are hunting for the murderer of a man who was stabbed outside a karaoke bar in Thalang yesterday.

“We found the body of Chaiyuth Innsathorn, 35, outside Panan karaoke bar in Thalang at about 3:20am. His throat was slashed and there was blood on his head and clothes,” confirmed Thalang Police Lt Suporn Muangkai.

“Another man named Rachane Rakpong, 27, was injured on his right wrist and taken to Thalang Hospital.”

Ladawan Raksa, a waitress at the bar, told police that four men were hanging around outside the bar when Mr Chaiyuth and his friend pulled up on motorbikes. Mr Chaiyuth honked at the men’s car, after which one of them called out to ask if they had a problem.

“Ms Ladawan told us that Mr Chaiyuth punched one of the men, whose friend then retaliated by drawing a knife and slashing Mr Chaiyuth’s throat and stabbing Mr Rachane on the wrist,” said Lt Suporn.

“The men then ran back to their car and drove off,” he added.

Police are questioning other witnesses, including Mr Rachane, and examining CCTV footage to help locate the suspect and his friends.