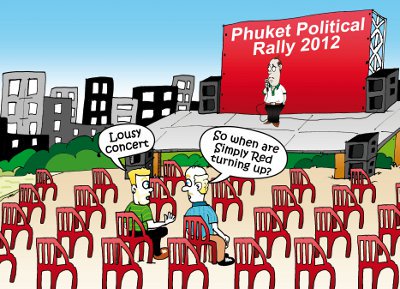 PHUKET: As this week passed, the non-event of the Red Shirt rally apparently planned to be held at Nai Yang Beach last Sunday settled in as a near miss.

The timing could not be a coincidence. Yesterday, May 19, 2012, marked the second anniversary of the violent confrontations in Bangkok between government security forces and the Red Shirt United Front for Democracy against Dictatorship (UDD). Hundreds were injured and 91 people were killed in the clashes between the two.

The rally in Phuket last Sunday was allegedly organized so that local leaders in Nai Yang, located immediately south of the airport, could proclaim their collective home as a “Red Shirt Village”. That move alone would isolate the villagers from the mainstay of their fellow Phuket residents, who have long and staunchly supported the Democrats, and by association their Yellow Shirt cohorts.

Sensational reports circulated that up to 2,000 Red Shirts were to arrive in Phuket for the “Red Shirt Sunday” event, they didn’t. Many people in Phuket will sigh, “Thankfully”.

The initial reaction by Phuket Vice Governor Somkiet Sangkaosutthirak must be praised, as he plainly told yellow-shirt protestors, “You all have the right to say what you like and dislike. So long as you act within the law, be assured that the authorities will protect you… We will show fairness to all sides.”

However, that did beg the question whether or not the hundreds of Yellow Shirt supporters at Provincial Hall last Sunday understood if the police armed with batons that had encircled their protest were there to “protect them”, as V/Gov Somkiet said, or to contain them if any unrest started to escalate.

But the end result served Phuket well, and hindsight tempts the question of whether the UDD intended to stage a rally in Phuket at all. They got their media exposure and at the same time tested the waters for a Red Shirt Village in Phuket.

Not since the SorPorKor 4-01 land scandal in Phuket, which brought down the government of Democrat Party icon Chuan Leekpai in 1995, has Phuket been a factor in the Thai national political arena. Even those events quickly shifted political focus from Phuket to Bangkok, despite Phuket being the scene of the crime. The Bangkok-centric mindset of the country spared Phuket from civil unrest then, and Phuket has yet to experience it since.

Phuket is not a political arena. It is clearly a venue for political grandstanding, but it is not an isle for activism. No one wants civil unrest here. The murders and corruption over land and business deals are bad enough.

Everyone just wants Phuket to keep on doing what it does best: make money. So be it.

To all the families who lost loved ones in the unrest two years ago, and in the years before, our hearts and minds are with you. May peace prevail in Thailand’s future.

PHUKET OPINION: Few winners in war against the sea