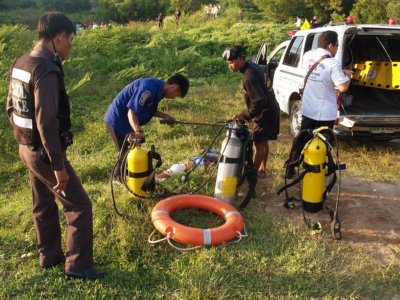 The deceased was identified by his Thai ID card as 59-year-old Sa-ngiam Sompanpaing, a resident of Srisaket province.

After arriving at the pond around noon yesterday, Mr Sa-ngiam told him to wait on shore while he cast the nets, said Mr Thiti.

Mr Sa-ngiam then said he wanted to bathe and dove into the water, but never resurfaced, Mr Thiti recounted with difficulty.

Mr Thiti, who uses a cane to walk, said he waited until about 4pm for his friend to reappear.

When he did not, he made the difficult walk back to main road, about 100 meters away, to report what had happened.

Rescue workers from the Kusonldharm Foundation were contacted at 4:30pm and a dive team began a search mission about an hour later.

They recovered Mr Sa-ngiam’s body from beneath the surface before dusk.

The body, clad only in a pair of black underwear, was taken to Vachira Hospital for examination.

Mr Thiti said that both men were staying in Kathu Temple, where the deceased had once been a monk.

A Kathu Temple monk said Mr Sa-ngiam had been staying there about two months at the time of his death.

The monk said he had the mobile phone number of Mr Sa-gniam’s wife and daughter in Chonburi and had already informed them of his passing.