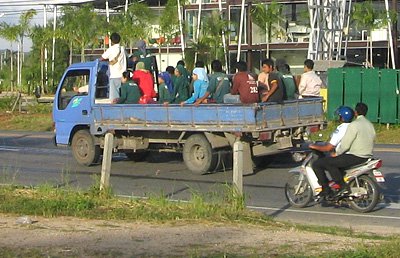 PHUKET CITY: The Phuket Labor Office has requested a daily minimum wage increase of nine baht for Phuket workers, which, if approved in full, would give the province the highest minimum wage rate in the country.

Labor committees in 70 of Thailand’s 76 provinces have submitted proposals to the Labor Department requesting minimum wage increases of between one and nine baht.

Phuket is asking for a nine-baht increase, which would raise the rate to 206 baht per day, the highest in Thailand.

The request follows the findings of an advisory panel appointed by the Phuket Labor Office that includes both government officials and business leaders.

Bangkok, where the minimum wage is currently 203 baht, is asking for an increase of 2 baht.

All minimum wage increase requests require Cabinet approval to become law; often the rate approved is less than that requested.

Suttipong Saisakares, head of the Phuket Provincial Labor Office, said the province had requested the increase because the island’s economy had started to recover.

“Most of our employers pay their workers a high rate already, around 250-300 baht per day,” he said. “Even [legally registered] alien low-workers get paid more than 197 baht.”

“I don’t think we’re going to have a problem with employers,” he added.

Last year the province had not requested an increase, while the year before the wage rose 11 baht, he said.

Minimum wage rates are currently highest in Bangkok and the surrounding provinces of Nakhon Pathom, Nonthaburi, Pathum Thani, Samut Prakan and Samut Sakon, all of which have a rate of 203 baht per day.

In Chonburi and Saraburi it stands at 179 baht, while Phang Nga, Krabi and Petchaburi have rates of 168, 165 and 164 baht respectively.

The lowest rates in the country can be found in Phayao, Phichit, Phrae and Sisaket, where they are currently set at 150 baht.

Visitors to Phuket from Krabi, Trang, Ranong, and Phatthalung will now have to prove they’re vaccinated or have a negative Covid-19 test within 72 hours of arrival, as they’ve been added to the red zone province list. People entering without those qualifications will have to take a rapid antigen test on the spot before being allowed into Phuket.

The 4 provinces join a group of 21 other provinces already on the Phuket red zone list requiring strict measures to enter. That list even includes Phuket itself, as people do exit the province have to prove a negative test or vaccination before being allowed to re-enter.

Phuket’s vice governor made the announcement yesterday after the governor signed the order and put it into effect until at least May 15th. That same order requires all trucks transporting goods to travel from 11 pm to 5 am, the nighttime hours that other people are not allowed to enter the island. Phuket recently closed its entry checkpoints from late night to early morning after reports of exhaustion from the health officials working to test everyone or verify their credentials.

Delivery drivers will also have to pass the same requirements as red zone province arrivals before entering Phuket. Any driver who does not have a negative test within 72 hours or proof that they’ve received both doses of a vaccine approved by Thailand’s Food and Drug Administration, will be forced to wait until the regular checkpoint opens at 5 am to receive a rapid antigen test.

Over 40,000 people from red zones have now been tested at the checkpoint to enter Phuket. In the first week of the requirement which began on April 22, health officials tested more than 22,000 people, overwhelming staff and prompting the government to close the entrance from 11 pm to 5 am to give checkpoint workers a break.

The 25 provinces currently classified as a red zone for entering Phuket are as follows: