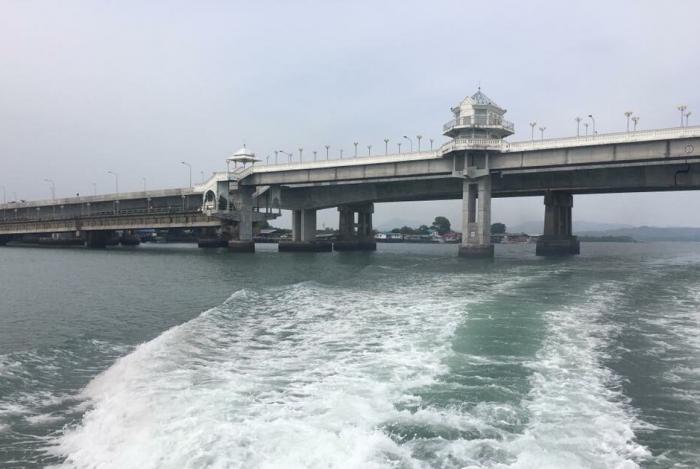 PHUKET: A 51 year-old man died after he and a 15 year-old girl jumped off the Sarasin Bridge at about 7pm yesterday.

The Thai pair, who police believe to have been father and daughter, were rescued by fishermen passing by on a boat.

Police said that the man, named as Ruab Duangjan, was unconscious at the time of his rescue, while the girl was reportedly in hysterics. The Phuket Gazette is withholding the minor’s name.

Rescue workers from Phuket and Phang Nga were originally unable to locate the pair, until receiving word that they had already been picked up by the fishing vessel.

The two were rushed to Takuatung Hospital in Phang Nga for treatment, where Mr Ruab succumbed to his injuries this afternoon.

“On arrival, the man was unconscious, but the girl was not seriously harmed,” said Mai Khao rescue worker Nattawut Plukmaidee. “Unfortunately we haven’t been able to get any information about why the two jumped from the bridge, as she’s been crying a lot.”

Locals and tourists reported seeing the two climb over the bridge’s railings and sit on the fence just before taking the leap.

The Sarasin Bridge is historically known as the ‘love bridge’. In February 1973, a couple allegedly bound their hands together and jumped off the bridge. Since then, a number of people have jumped from the bridge to their deaths. Earlier this year, a brokenhearted girl also jumped off the bridge, due to a failed relationship (story here).