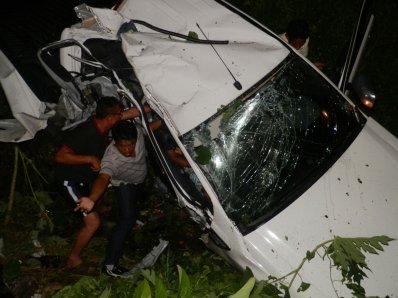 PHUKET: A Phuket Town man died after his pickup slammed into a power pole in Thalang district last night.

Thalang Police were informed of the accident, opposite Srisoonthorn Municipality offices on Thepkrasattri Road northbound, at 10:30pm.

Rushing to the scene with Phuket Kusoldharm Foundation rescue workers, they found a badly-damaged Ford pickup off the road a few meters down an embankment.

The rescue workers had difficulty freeing the driver, the only occupant of the extended cab vehicle.

A Thai national identification card found in the cab was issued to 40-year-old Phichai Chuaythaen, listed as a resident of Damrong Road in Phuket Town.

However, the driver was unable to confirm that identity as he was unconscious throughout the rescue effort and appeared to have suffered severe head injuries.

He was rushed to Thalang Hospital for emergency treatment, then transferred to the better-equipped Vachira Phuket Hospital in Phuket Town, where he died.

There were no eyewitnesses to the accident to help explain how the vehicle ended up in such an odd position after the crash, which snapped the power pole in two.

Emergency workers from the Provincial Electricity Authority were called in to shore up the pole, which remained standing only under tension from the cables it was built to support.

Local residents reported hearing the screech of braking tyres, followed by the booming sound of the crash, which they likened to that of the earthquake sonic booms heard in Thalang last month.

Update: The wife of the deceased visited the Phuket Gazette offices on July 10, 2012 to insist that her late husband was not the same man who was listed as “under observation” for involvement in the drug trade in Ranode District, Songkhla in 2009. The fact that the two men shared the same name was a coincidence, she said. The section of the original report that points out this coincidence was thus removed at her request.