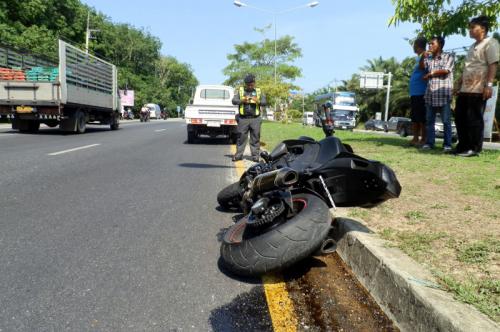 PHUKET: A second Malaysian biker participating in the Phuket Bike Week died on Sunday morning after losing control of his motorbike on the infamous Baan Kor En curve and crashing into the median strip in Thalang.

Zhi Wei Loh, 29, was starting the return journey to Malaysia with a group of friends when he approached Baan Kor En curve on Thepkrasattri Road at about 9am, said Lt Thanom Thongpan of the Tah Chat Chai police.

“Mr Loh’s friend said that as they arrived at the curve, Mr Loh, who was driving at high speed, lost control of his bike. Mr Loh then fell off the bike, rolled, hit the road median and broke his neck. He died at the scene,” said Lt Thanom.

Lt Thanom confirmed that Mr Loh was wearing a helmet at the time of the accident.

This was the second reported Phuket Bike Week fatality this year. The first came before the event started, as a Malaysian biker en route to Phuket died in an accident in Phattalung (story here).