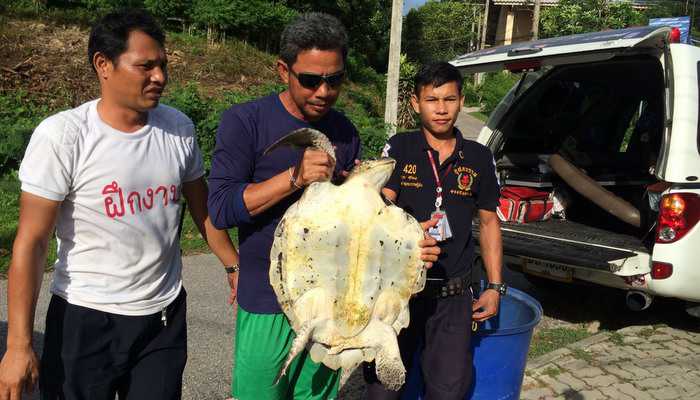 Kusoldharm Foundation rescue workers were called to the scene by locals, and brought the badly injured Olive Ridley sea turtle to the Phuket Marine Biological Center (PMBC) at Cape Panwa.

“The turtle had grown tired from dealing with the big waves in the Andaman Sea and was badly injured by a fishing net – its left fin was severed,” said PMBC Veterinarian Patcharaporn Gaewmong.

“Many turtles that are caught by fishermen are thrown back into the sea without being untangled from the fishermen’s nets. This makes it almost impossible for them to swim and feed properly.”

Currently, 20 sea turtles are under the PMBC’s care; most of which have been injured by fishing nets.

“This is mating season for Olive Ridley sea turtles, so they won’t be staying in deep water and can be easily caught. Fishermen need to take better care of cutting turtles free from their nets before putting them back in the water,” said Dr Patcharaporn.

“If the community doesn’t take better care of them, Olive Ridley sea turtles will become extinct.”

Motorbike crashes into group of Chinese tourists in Phuket