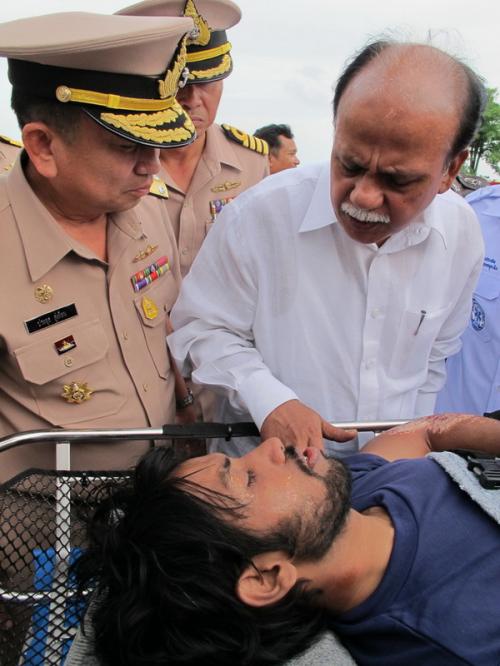 PHUKET: Three more survivors were plucked from the sea yesterday as the Royal Thai Navy continued its search for the crewmen still missing from the Bangladeshi cargo ship MV Hope, which capsized in heavy seas south of Phuket on Thursday night (story here).

“They were all found within the search area, a 20 nautical-mile radius from where the ship capsized. We vectored where the current and wind would carry any survivors,” he explained.

All three were taken on board the search vessel HTMS Pattani, airlifted to Phuket and rushed to Vachira Phuket Hospital in Phuket Town.

Bangladesh Ambassador to Thailand Kazi Imtiaz Hossain was at the Third Area Command naval base on Phuket’s east coast when 2nd Officer Hossain arrived by medivac helicopter at about 5:30 pm.

Amb Hossain rushed to greet him as medical staff transferred the merchant seaman from the helicopter to an ambulance waiting nearby.

“I asked him his name, just to check that he was okay. He seemed very weak, but he said his name. It’s a matter of great relief to see the survivors,” Amb Hossain said.

“I also introduced myself to him to let him know that he has not been abandoned,” he added.

Amb Hossain affirmed that his embassy staff was doing all they could to assist the search and recovery efforts.

“We will do anything to take care of our citizens. Primary assistance has been provided by Thai authorities, such as medical care. They [the survivors] will be going home as soon as their physical condition allows them to travel,” he said.

“We are very grateful to the Royal Thai Navy and the Thai officials who have risked their lives for the survivors. I pray they rescue more men,” Amb Hossain said.

Search efforts, assisted by the German container ship Buxmoon, yesterday also recovered the bodies of two men believed to be crewmen of the MV Hope.

The remains of the two men were brought ashore at Phuket’s Deep Sea Port at about 9:30pm.

“The two bodies have yet to be identified,” said Rear Admiral Prayuth Phutien of the Royal Thai Navy’s Phuket-based Third Area Command.

“They will be transferred to Vachira Phuket Hospital for further examination and identification,” he said.

Glue-huffing monk on holiday in Phuket also a thief