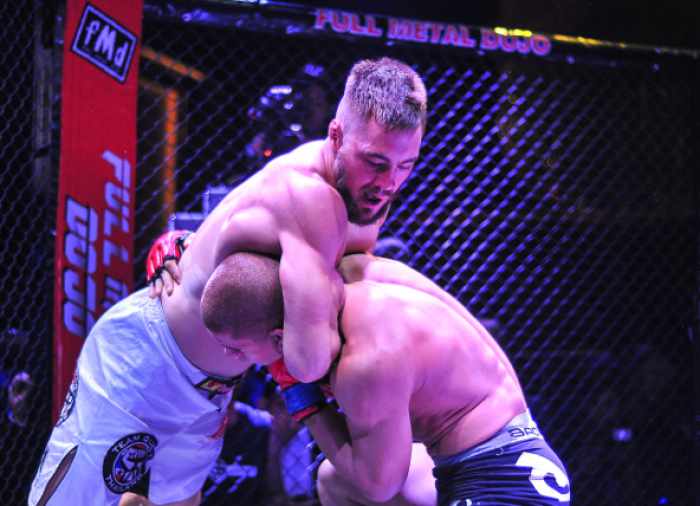 PHUKET: The choice of Seduction Beach Club and Disco, one of Bangla’s most popular clubs, as the venue for Phuket’s inaugural Full Metal Dojo MMA event proves that the organizers had a lot of confidence in their success. And rightly so.

At first impression, it seemed that only a few Thais were among the crowd of 500 or so MMA fans at the event, but when the cheer-the-ring announcer and organizer of the event, Jon Nutt, switched from English to Thai, it proved otherwise.

This element of creating an event for Thai fans and for foreigners was present throughout the evening. “We’re bringing MMA to Thailand, we’re bringing Thais to MMA,” kept repeating Nutt, and to prove his point, he began the event with a daring performance of Sansoen Phra Barami, the Thai Royal Anthem.

However, as good as it was, it wasn’t the music – including Nutt’s interpretation of Metallica’s Enter Sandman and a Thai hip-hop freestyle to the tune of Eminem’s Lose yourself – that brought the audience to Seduction, it was the MMA – arguably the world’s fastest growing sport and a discipline that is said to be illegal in Thailand… at least in theory.

The Sports Authority of Thailand banned MMA competitions in 2012, citing the “brutality of the sport” as the reason for their decision.

“Organizing MMA here could mislead the public into believing that Muay Thai is brutal,” said SAT Deputy Governor Sakol Wannapong. “Organizing an MMA event here would hurt the image of Muay Thai. If you want to do this kind of business, you should do it in another country.”

Since then, MMA promoters and their lawyers have sidestepped the ruling by organizing MMA events across the country under the clear legal standpoint that there is no law banning the sport in the Kingdom.

DARE Fight Sports, MMA’s biggest promoter in Thailand, announced last year that the SAT had lifted the ban on MMA – a fact confirmed this week by Santi Pawai, director of the Phuket Office of Tourism and Sports.

“MMA is not illegal. Organizers of this kind of event must ask permission from the local authority… If they get permission, I do not think it will be a problem,” he explained.

“I do not think MMA takes away [from] Muay Thai. Muay Thai is unique. It cannot be taken away [from].”

The Hooter’s girls tasked with announcing subsequent rounds were not called into action often, as most of the duels finished within the first round, such as with the first fight, between Dylan “The Muscle” Fussel and Nanthon Chantharamani, with the former claiming the victory by TKO in under a minute.

The only fight to reach the second round was between Ratcharat Yimprai Sakset and Nun “Poe Saksit” Sophea. Despite the event’s relaxed rules, Poe Saksit managed to foul three times and the referees had to stop the fight and award the victory to his opponent.

Emotions peaked during the final bout in which Finland’s Glenn Sparv defied Michael Dubois, who agreed to enter the cage just one day before the event and managed to lose 6kg to make the weigh-in.
By entering the cage at such short notice, Dubois proved his fighting spirit and showcased his skills during the spar, coming close to claiming a first round KO with a destructive kick to Sparv’s face, not to mention a number of textbook Judo throws.

However, it was Sparv who claimed victory when the referee stopped the fight after Sparv landed a series of knee kicks on Dubois’ head.

If you missed Phuket’s first MMA bout, do not despair. Many of the Full Metal Dojo fighters will attend the August rematch event, for which a venue has yet to be announced – and according to Jon Nutt, there is more to come, with plans for one MMA event every six weeks in the works.