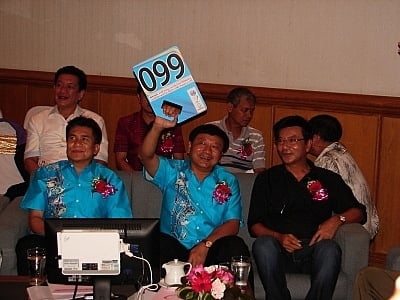 PHUKET: The sixth annual “Lucky License Plate Auction” kicked off today at the Metropole Hotel in Phuket Town with the much sought after Kor Nor 9999 plate selling for 1.4 million baht.

The numbers “8” and “9” are auspicious numbers according to traditional Thai beliefs.

Mr Jaruk said the plates were not for himself, but for a man he only identified as his “boss”, who runs a sand and gravel business in Phuket.

Chair of the event and Department of Land Transport Deputy Director Asathai Rattanadilok Na Phuket said it is hoped that this year’s auction will generate more than the 18,745,500 baht brought in last year.

“Last year Krabi made 19mn baht in their second-annual plate auction – the highest amount of any province in the South,” he said.

“So, Phuket, please try to beat them. You have the potential to do so,” Mr Asathai said.

Phuket was the first province in Thailand to raise money through a license plate auction, six years ago. For our previous report, click here.

The auction will run for its final day tomorrow, at the Prapitak Ballroom at the Metropole Hotel.