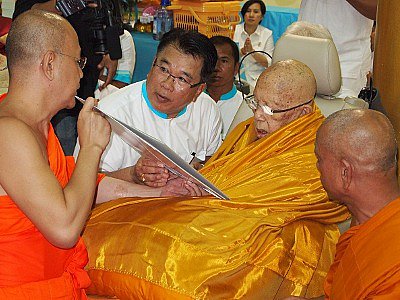 Representatives from the Buddhist clergy were joined by Phuket Governor Tri Augkadachara in presiding over the merit-making ceremony at the temple in Chalong that bears Luang Pu Supha’s name.

Phra Dhammasitthinayok led a ceremony to confer the degree and pay respects to Luang Pu Supha.

Phra Srikhamphirayan, deputy academic chairman at Chulalongkorn University, declared that on March 23 the university’s council had come to a unanimous decision to confer the degree on Luang Pu Supha because he had demonstrated exemplary dedication to the Dharma, the teachings of Buddha.

Although Luang Pu Supha is not recognized by Guinness World Records as the World’s Oldest Living Man, if his documents are correct he would claim the title.

His birth certificate, claimed to have been issued two years after he was born, reads September 17, 1896.

This would make him older than Japan’s Jiroemon Kimura, currently recognized as the World’s Oldest Man, who was born on April 19, 1897.

It would also make him the second-oldest person in the world after US citizen Besse Cooper, who was born on August 26, 1896.

Nevertheless, in order to be verified as the World’s Oldest Man, Luang Pu Supha – or someone on his behalf – would need to inform Guinness of his desire to claim the title.

Luang Pu Supha has so far expressed no interest in doing so.