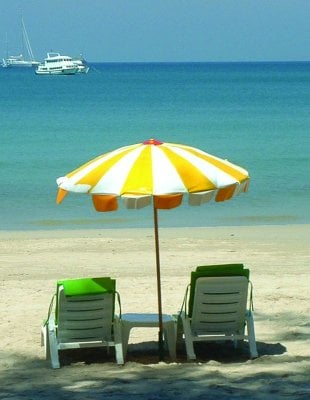 PATONG : In another sign that things are returning to normal, Patong Municipality is allowing beach lounger rental operators to begin limited re-colonization of the tsunami-swept sands of Phuket’s most popular beach.

The move follows a request by the Municipality to the central government to allow a limited number of beach loungers, arguing that the government’s plan to ban them completely fails to reflect the desires of tourists and would cause undue hardship among rental operators.

After the tsunami hit Phuket last month, the government announced a plan to ban beach loungers entirely, allowing only plastic mats, and to limit the number of rental umbrellas along Patong Beach to just 2,000, compared with 7,000 before the tsunami.

The beach chair operators, with the support of former Deputy Mayor Somkiat Kuru and other beach business operators, have successfully petitioned Phuket Governor Udomsak Usawarngkura, the Tourism Authority of Thailand (TAT) and Patong Municipality, to be allowed to set up loungers on the beaches – if only on a temporary basis.

Starting today, they were allowed to set up a single row of plastic beach loungers with tables and umbrellas. Heavy wooden beach loungers, most of which were destroyed in the tsunami and are thought to have been responsible for many deaths, are banned.

Patong Municipality Chief Administrative Officer Poonsak Naksena said the government had eased the restriction somewhat in order to allow the lounger operators to make a living while the beach reorganization plan is being drawn up.

He said that once the plan is finalized and new regulations are in place, the beach chair operators will be required to abide by them.

“The zoning of the beach, to be carried out by the TAT, will determine exactly where operators can set up,” he said, adding that there would be sufficient gaps between rows to allow quick evacuation of the beach should it be hit by another tsunami.

Umpian Thernthin, the leader of Patong’s 55-member beach lounger rental co-operative, said that by this morning 200 lounger-and-umbrella sets had already been set up.

“The number is low because operators are still ordering replacements from Bangkok, where the cost of one set with two loungers, a parasol and drinks table is 6,300 baht. This is cheaper than in Phuket. However, this number should be adequate for now because that aren’t that many tourists around,” he said.