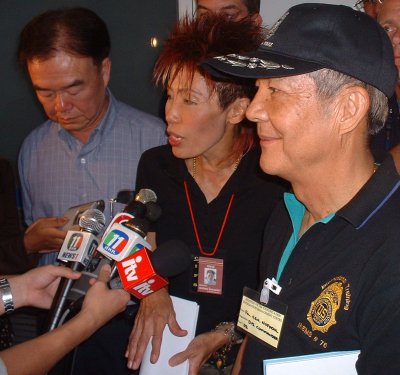 PHUKET: Work began today to move the bodies of more than a thousand non-Asian victims of the tsunami from Phang Nga to the Mai Khao Cemetery in Phuket.

The cemetery is close to Phuket international Airport, and the move is intended to make it easier for bodies, once identified, to be repatriated by air.

Bodies believed to be Asian will remain in Phang Nga, after villagers from Takua Pa protested that there was a possiblity that their loved ones would be moved to Phuket by mistake.

Dr Pornthip has been based at Wat Yan Yao in Phang Nga, where thousands of bodies have been stored, while Gen Nopadol has been working from the headquarters of the TOT telecommunications company on Chao Fa Rd.

The two have clashed notoriously over the identification process, leading to claims that they have been “fighting” over the bodies. The meeting was intended to resolve this dispute.

Forensic experts from 31 countries, along with Interpol officers, have been working together at the TTVI to analyse DNA taken from the bodies of the deceased and to match it with that of living relatives.

After seeing the work at TTVI, Dr Pornthip said she was satisfied with the process of collecting and comparing the data. She added that the Wat Yan Yao mortuary is due to be closed on February 3.

Up until today there were around 1,800 Caucasian bodies at Wat Yan Yao and 1,500 Asian – likely to be those of Thai, Burmese, Chinese, Japanese or Korean victims. Yet more bodies were stored at Wat Bang Muang.

While Dr Pornthip’s staff are trying to establish the exact cause of death of each person, Gen Nopodol’s team’s task is to identify them.

“Dr Pornthip will send her data for matching with the data at the TTVI… This data should make it easier to identify each body,” said Gen Nopadol.

He was at pains to stress that the transfer of the corpses should not disturb tourists or local residents.

He said, “The bodies will not smell, they are being kept away from the community, and we have a system to control the spread of disease.”