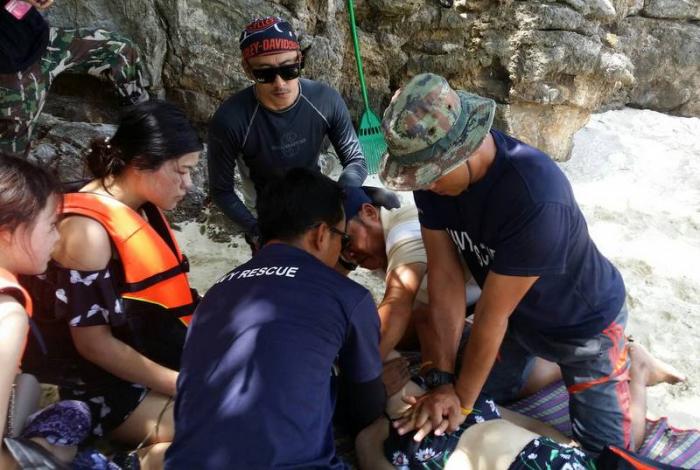 KRABI: A Chinese tourist was lucky that a Royal Thai Navy rescue team was on hand after she nearly drowned in the Andaman Sea on Saturday.

Xiaochang Lai, 23, along with five other tourists, was touring the bay on a longtail boat and had stopped to snorkel around the coral reef at Koh Gai.

Ms Lai became separated from her group. The other tourists alerted the boat crew, who searched for about 10 minutes before finding her unconscious in the water.

They then radioed for help, which arrived in the form of a team of Navy rescue officers from Lanta Noi Naval Station.

“We were patrolling as usual around Railay Bay when we got a report from a tour boat that a tourist was unconscious after snorkeling,” said Chief Petty Officer Veerawut Praidam said.

The team then rushed to the scene aboard a rescue boat to help Ms Lai.

“When we saw her, she was very pale and we couldn’t find her pulse,” Chief Veerawut said. “We tried our best to perform CPR [cardiopulmonary resuscitation] and provide first aid until she became conscious. We were very glad to see her recover.”

“After sending her to Krabi Hospital, we also notified the Tourist Police so that they could continue looking after her,” he added.

Chief Veerawut also thanked the tourists who were with her, as well as the the boat staff and tour guide who got her out of the sea.

“She spent 10 minutes in the water, which is very dangerous. So it wasn’t just us who helped; without these people she might not have survived,” he added.