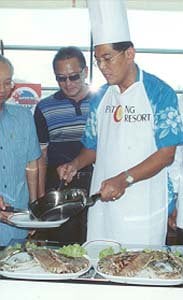 PHUKET: The month-long Phuket Lobster Festival got underway on Friday with a promotional event organized jointly by the local Tourism Authority of Thailand (TAT) office and the Phuket Tourist Association (PTA). The festival, which coincides with the August 14-23 Asia-Pacific Economic Cooperation (Apec) meetings in Phuket, is intended to boost tourist spending on the island for the period to 500 million baht. At the opening ceremony held at Patong Resort, Vice-Governor Winai Buapradit showed off his culinary prowess by preparing a dish of lobster fried with black pepper and allowing members of the press and other attendees to sample it. Reviews were positive. Twelve organizations taking part will offer lobster at a fixed rate of 900 baht per kilogram throughout the festival. They are Diamond Cottage, Royal Palm Resotel, The Royal Paradise, Central Karon Village, Islandia Group & Spa, Phuket FantaSea, the Kata Group of hotels, Thara Patong, Kata Thani Hotel & Resort, Felix Karon, Diamond Cliff Resort & Spa and Patong Resort. More than 20 different dishes made from lobster will be offered. Anupharp Thirarath, Director of the local TAT office, said the event would attract more tourists to the island and was by no means intended solely for the dining pleasure of visiting Apec delegates.

Island security stepped up for Apec