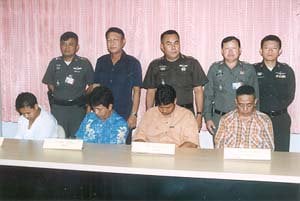 PATONG: Police yesterday arrested four more people they believe were involved in the execution-style murder of newspaper and TV reporter Surapong “Od Patong” Rittee in Patong six months ago. One of those arrested is a police officer who was formerly stationed at Kathu Police Station. K. Surapong, 43, was gunned down by two .38 rounds fired close to his left ear as he was walking out of the Aree Karnka mini-mart on Rat-U-Thit 200 Pi Rd in the early hours of February 11. A reporter for Thai Rath and Siang Tai daily newspapers and for TV Channel 3, K. Surapong also had many business interests around Patong, including a cigarette dealership and a prawn farm, as well as rental housing and connections with the entertainment industry. Police from Region 8 made the first arrest in the investigation on May 24 when they caught Amornpol “Paew” Promkerd, 40, as he walked alone in Bangkok’s Don Muang District. The Commander of Phuket Provincial Police, Pol Maj Gen Kongpol Suwannaraks, said that Amornpol is still being held in custody in Bangkok, having been refused bail. He denies being involved with the murder. Gen Kongpol added that he believed that K. Surapong was murdered because of a series of reports he wrote about an entertainment venue in Patong that resulted in its closure. Those arrested yesterday are Pol Cpl Chalermsak Auksornpien, 33, who was recently transferred from Kathu to Region 8 headquarters in Surat Thani; Somporn Tansakul, 42, and Amnard Tansakul, 33, both bar managers; and Saree Hawaedasae, 47. It appears that police had been watching the four men for some time, and coordinated their actions carefully so that all four were arrested at the same time in different places. Chalermsak was caught in Moo Baan Anuphas Manorom, Phuket Town, Somporn in the Mai Khao area, Amnard at Phuket Highland Ville near Phuket Town, and Saree at a bar on Soi Sea Dragon, Patong. All four have been charged with conspiracy to murder and abetting the murderer. They all denied the charges and are currently in custody undergoing further questioning.