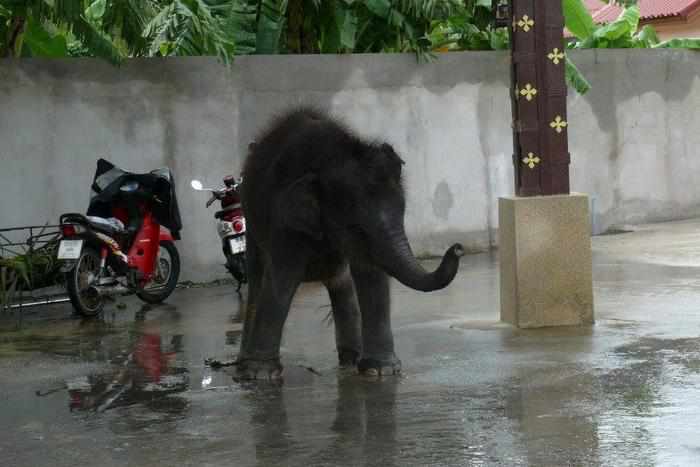 PHUKET: Officers from the Phuket Livestock Office have implored police to investigate the case of a baby elephant who is being kept on a short chain in the parking lot outside a house on Chao Fa West Road.

The call follows an investigation on August 24 into the legality of a 2-year-old elephant, Tiptawee (story here).

Pichitra Tanode, who is keeping the elephant, told officers that she lost the paper proving legal transport of the animal from Ayutthaya.

“The elephant was transported several months ago, but Ms Pichitra was unable to present the proper transportation documents to us,” said Phuket Livestock Chief Weerasit Putthipairoj.

Though Ms Pichitra did not present transportation documents, she did present a Sor Por 5 letter, which names the elephant’s owner.

“Renting or buying an elephant from the noted owner is legal, but Ms Pichitra must update the document so that it shows her name and the current location of the animal.”

Mr Weerasit noted that people have been prohibited from transporting any more elephants to the island, except under special circumstances.

“We currently have 210 legally owned elephants on the island. However, we are aware that there are also illegal elephants here,” he said.

“If elephant owners do not have all the necessary paperwork, police must arrest them and charge them.

“It seems that Tiptawee is legally owned, but we believe he could have been transported illegally. It is up to the police to follow the case,” said Mr Weerasit.

Phuket Poll: Should we allow a dolphin park in Phuket?