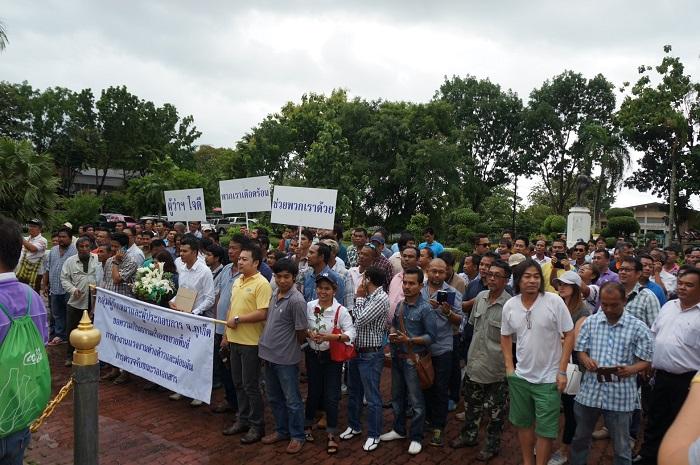 PHUKET: The publication of a list of 20 government offices whose officers are allegedly extorting bribes from employers of migrant workers has prompted an embarrassed Phuket governor and the provincial police head to condemn corruption and vow to investigate the allegations.

Phuket Provincial Police Commander Teeraphol Thipjaroen said he was aware of the list and that “justice will be served”.

The allegations come after a crowd of more than a hundred employers of migrant workers gathered at Phuket Provincial Hall to protest the difficulties in registering their workers (story here).

The revelation comes after news on August 1 that a Myanmar national was allegedly abducted and forced to pay 120,000 baht to men claiming to be police officers investigating migrant workers (story here).

The list also details whether the monthly transactions were to be made in person or by wire transfer. It alleges that 3,000 baht a month goes to the Bangkok Office of the Anti-Trafficking in Persons Committee.

“I’d heard about some bribery schemes over some migrant employers a long time ago and I sent out a letter ordering them to collect all the evidence they have and to file complaints against those officers,” Gov Chamroen said. “However, to this day, I’ve never received any complaint or evidence of bribery from them.”

“If the employers of migrants feel they’re being bullied or treated unfairly, I encourage them to please come to see me,” he added. “I will personally oversee the investigation.”

Gen Teeraphol said his office will be investigating the allegations in two stages.

“Our first priority is to find out if those officers are real, then to find out where this list came from,” he said. “I personally have never gotten involved in any form of bribery or extortion. If the employers of migrant workers feel that they have received unfair treatment from any officer, please file a complaint with us.”

Gen Teeraphol said he would appoint a deputy commander to handle the case.