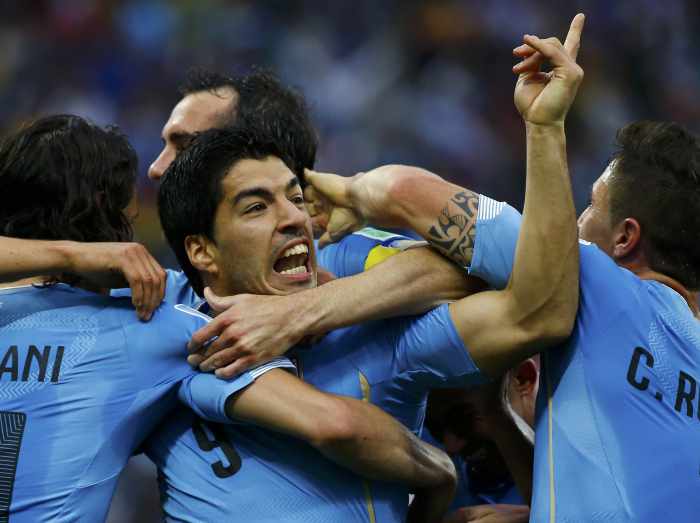 Restored to the lineup after injury, Suarez nodded home Edinson Cavani’s cross in the 39th minute and after Wayne Rooney equalised in the second half the Uruguayan took advantage of slack defending to slam home the winner five minutes from time.

The result left England, who lost 2-1 to Italy in their opener, bottom of the group and with little hope of reaching the last 16. Italy play Costa Rica in the other group match on Friday.

After a tense start at the Corinthians arena the game burst to life when Rooney, restored to his more favoured central role, whipped a wicked free kick just wide of Fernando Muslera’s post with 10 minutes gone.

Rooney went even closer after half an hour when he met Steven Gerrard’s inswinger but his close-range header smacked back off the woodwork while he landed in the net.

With England fans jeering Suarez’s every touch, the stage was set for him to turn the game on its head.

A lucky break in midfield sent the ball out wide to Cavani and Suarez escaped the attentions of Phil Jagielka to nod back across England goalkeeper Joe Hart for a 1-0 lead.

Suarez, who had been well policed by England’s centre backs until that point, wheeled away with a huge smile on his face, kissing his wrists and gesturing frantically in delight.

After the break, Uruguay had England on the ropes and Cavani should have done better when put clean through on Hart by Suarez, but the rampaging forward screwed his shot wide.

England gradually regained the initiative with Rooney, widely criticised for his performance against Italy, at the heart of all their best work.

The number 10, who had never scored in the World Cup, picked up the scraps from a Leighton Baines delivery and brought a terrific save out of Muslera in the 55th minute.

Just as it looked like England would never find the net Rooney breathed new life into them.

Full back Glen Johnson worked his way into the box after delightful work by Sturridge, and his square ball was rammed home by Rooney at the far post, sending the massed ranks of England fans behind the goal into a frenzy.

England were in the ascendancy but when Gerrard failed to deal with Muslera’s punt Suarez was away, outpacing Gary Cahill and slamming the ball past Hart.

England pushed for an equaliser but Uruguay held firm, picking up three points that could go a long way to putting them in the knockout stages.