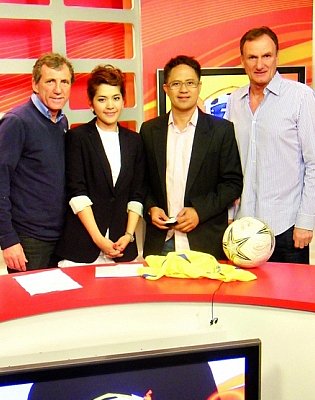 PHUKET: THE host venue for the Liverpool Legends versus the Legends of Thailand Phuket leg has officially been advised to the Phuket Gazette as the Thanyapura Sports and Leisure Center (TSLC), by the owners and promoters North Scoreboard Co Ltd.

“Thanyapura was selected for the quality of the pitch and facilities to support our international teams and visitors, as well as the enthusiasm of the team to be involved in the Football Legends concept.

“We are excited to hold this important match at the world class facilities of Thanyapura which we believe the fans will enjoy immensely,” said Cris Rosenbergs, Director of North Scoreboard, the owner and creator of the Football Legends concept.

Spread across 22.5 hectares, Thanyapura is a state-of-the-art facility for international sporting events. The Legends match will be played on their synthetic rugby surface, endorsed by the International Rugby Board.

“The opportunity to showcase our facilities at this stage of our development with such an internationally famous group of players is one we have proudly taken. Thanyapura represents a major step forward in sports and leisure facilities on Phuket and we feel this match and its other activities will highlight to the people of Phuket, Thailand, and indeed around the world, who will see the match on TV, what Phuket has to offer for world class sporting events,” said Dave Roberts, Vice President for Operations of TSLC.

“The Legends of Liverpool have brought a great deal of success to the team in the past, and have many fans around the world. Liverpool is one of the leading teams that Thai people support.

“Bringing together such a team of famous past players is not a simple task, and TrueVisions is excited and proud to welcome the team to Thailand and to provide media partnership to the organizers through its own channels.

“TrueVisions is more than delighted to update all the activities that will be part of the tour. Apart from the live broadcast of the matches in Bangkok and Phuket, TrueVisions will provide special benefits to its subscribers to further promote the tour and support other activities of the official partners,” said Ong-art Prapakamol, Chief Commercial Officer of TrueVisions PLC.

As part of the Legends tour, the team will participate in a range of activities, making an eventful TV series which will be broadcast worldwide highlighting the destinations they visit.

The match of Legends will be held at Thanyapura at 6pm on June18. Gates open from 4pm. Tickets are available from HomePro outlets on Phuket or can be purchased at Thanyapura.

The Phuket Gazette is the official local media partner for the Phuket leg of the tour.