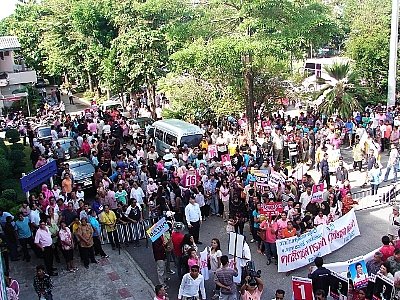 PHUKET: A large crowd of supporters greeted three political hopefuls this morning as they arrived at Phuket Provincial Hall to register their candidacies with the Phuket Election Committee (PEC).

First on hand to register, at 8:30am, was Bhumjaithai Party candidate Jirayus Songyos, who will contest Phuket Constituency 2.

The second applicant was Pheu Thai Party candidate Wisit Jai-arj, who will run in Constituency 1.

He was followed by Pheu Thai Constituency 2 candidate Saman Kebsap.

Only two supporters were allowed to escort the applicants inside the PEC office, which left hundreds of supporters to cheer for them outside the building.

By about 9:30am, all three candidates had completed registering and then paid courtesy calls on government officials working at Provincial Hall, presenting them with campaign leaflets.

By 10am the candidates left the grounds to continue campaigning elsewhere.

Expected to register when the office reopens tomorrow morning are Anchalee Vanich Thepabutr and Raewat Areerob of the Democrat Party.

Mr Raewat represented Phuket in the most recent government, while Mrs Anchalee served as Secretary to Prime Minister Abhisit Vejjajiva.

Mrs Anchalee’s return to electoral politics follows an announcement by her husband, Tossaporn Vanich Thepabutr, that he would not stand for re-election after serving in the previous government.

Mrs Anchalee has represented Phuket in Parliament before, as a party list candidate for the Democrat Party.

The PEC will accept applications at their second-floor offices in the new building of Phuket Provincial Hall, known locally as the Sala Klang, between the hours of 8:30am and 4:30pm until Saturday.

Legends to match up at Thanyapura, Phuket