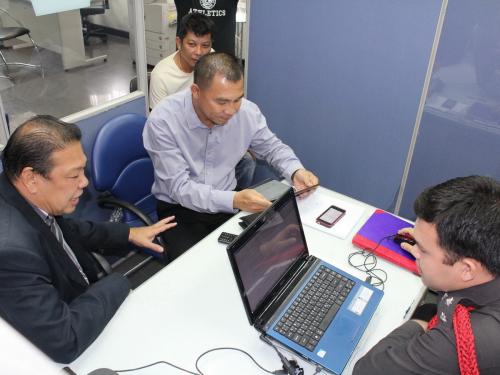 PHUKET: Five of the men whose names or businesses appeared on the Department of Special Investigation’s (DSI) “mafia” list have struck back at the DSI’s allegations that they had links to illegal taxis and organized crime (story here). Three have already filed defamation suits.

Thammawat Wongcharoenyut and Siwa Siangyom filed their complaints against the DSI in Phuket on Saturday. San Charoenjit reportedly filed a defamation complaint with police in Bangkok.

“I am clean. Just an ordinary villager who lives and operates a business in Phuket,” said Mr Thammawat, who runs a taxi operation on the island. “I have no illegal taxis – all of them are properly registered,” he said.

“The DSI revealed my name without any consideration of the repercussions it would have in my life. Now that my name has been published like this, how can I be in Phuket?,” he said.

Mr Thammawat believes that one possible cause for his name appearing on the list was because he led a protest over Airport of Thailand (AoT) not allowing his tour desk to renew its concession at the Phuket International Airport after it expired on July 30.

“I had been doing business at the airport for more than 10 years, and then, out of the about 100 businesses that operate there, they decided not to renew my concession,” he said.

Siwa Siangyom, whose concession at the airport was renewed when his contract expired, was in disbelief to find his name on the list.

“I was mortified after I heard that my name was on the list of illegal taxi operators,” Mr Siwa said.

“I do not know where the information the DSI got came from,” he said. “I operate a tour desk at the airport that has been handling hotel room and tour bookings for about the last 14 years,” he said.

Preechavude ‘Prab’ Keesin, son of the mayor of Patong, who was also on the list, decried the DSI’s “assumptive” list.

Nonetheless, Mr Preechavude made it clear that despite being cited on the list he was not planning on pursing a legal suit against the DSI. Nonetheless, he hoped that the “DSI would take responsibility” for what happened.

“The DSI is going after businesses in Patong as if these operators are running the mafia, when the real mafia operates outside of the business owners,” said Mr Preechavude.

There is no mafia in the way that the western media is perceiving it, as a group of business owners operating illegal taxi businesses and scamming tourists, he told the press.

“If government officers are unable to identify the real members of organized crime in Phuket, they should resign or be moved to another province – because if they don’t know who those people are, then it means they aren’t actually working,” said Mr Preechavude.

Mr Preechavude and others gathered on August 11 to express their concern over the way the word “mafia” was being used by the DSI and media.

“I am concerned because I have already had many investors and tourists contact me to ask if Patong has a mafia,” Mr Preechavude said.

Setthasak Buason, president of Limousine Call Center and manager of the taxi station in front of Jungceylon shopping center, was also shocked to find his name on the list, but has yet to make a move to file a lawsuit against the DSI.

“I am not associated with any mafia operations on the island,” Mr Setthasak said.

“The taxi station in front of Jungceylon is one of the best managed queues on the island,” he said.

“I want the DSI to treat us fairly. If they want help, I am more than happy to assist in anyway I can,” Mr Setthasak said.

Weerawich Krueasombat of the Patong Entertainment association stood up this weekend to support the local businessmen named on the list.

“This is not fair to us, because now tourists will have no confidence in their safety when they come to Phuket,” he said. “If the DSI wanted to know who was in the mafia, they should have asked business owners, not government officers.”