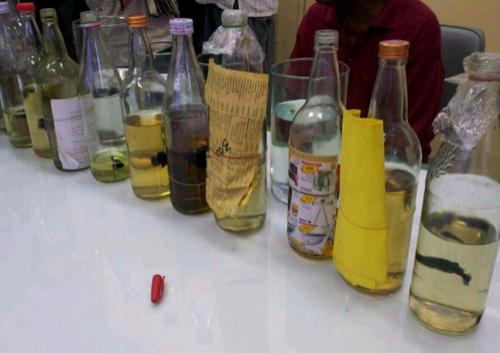 “I received a report of a place that was open every weekend for fish gambling,” Thalang Superintendent Sirisak Warasiri said. “So I sent my men to investigate.”

“They found a well-established location with tables and chairs for the gamblers,” he said.

Police raided the den, in a rubber plantation in Pa Khlok, at 12:50am on Saturday morning.

“When we arrived, about 20 gamblers were in the middle of watching a fish fight,” said Surat Luecha of the Thalang Police.

“As soon as they started betting, we identified ourselves as police,” Lt Surat said.

“The men took off running into the plantation; we were only able to catch nine of them,” he said.

About eleven gamblers were able to escape into the surrounding Thalang rubber plantation.

Police seized 28 fish, 200 baht in cash and charged the suspects with gambling.