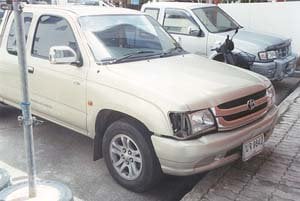 TAH CHAT CHAI: Two men, caught at Tah Chat Chai checkpoint early today after stabbing a man to death, were apprehended because of the victim’s last mobile phone call. Soonthron Nabin, 33, and Adul Katesiri, 32, who identified himself to police as Thanapolpan Katesiri, were arrested at the checkpoint on Phuket’s border after officers had been warned to look out for the Toyota Tiger pickup. On inspecting the truck, officers found blood on the floor of the cab and a 12-gauge shotgun loaded with a single cartridge. Their discoveries prompted a search for the owner, 26-year-old Saichon Deekaew. His body was found dumped in the jungle behind the Laguna Service Company in Moo 6, Cherng Talay, at about 4:30 am. The pickup was reported missing by K. Saichon’s boss, who called the police at 3:30 am after listening to a conversation in the cabin of the stolen pickup over Saichon’s mobile phone. The two men kidnapped K. Saichon in his truck at Saphan Hin in Phuket Town and headed north in it because they had no money. Pol Lt Prakorb Khunsan of Cherng Talay Police Station, told the Gazette, “K. Saichon made a secret call to his boss, KPP Cable TV’s Winai Seedokbaub. K. Winai saw that it was K. Saichon’s number, and heard K. Saichon’s voice along with strangers.” He heard K. Saichon telling the men to take the pickup, but pleading with the pair not to hurt him. His plea for life was not successful. “Unfortunately, Thanapolpan got angry, stopped the pickup then killed him,” said Lt Prakorb. “Thanapolpan, who sat in the back, asked K. Saichon to stop driving, then locked his arm around K. Saichon’s neck and stabbed him four times in the chest and stomach with a jungle knife until he was sure he was dead. The pair then dumped his body.” Evidence collected by officers include a Nokia 3310 mobile phone, 390 baht in cash, a Baby-G watch, the 12-gauge shotgun and the pickup truck, all belonging to K. Saichon. Both men were charged with murder, theft and possession of stolen property.