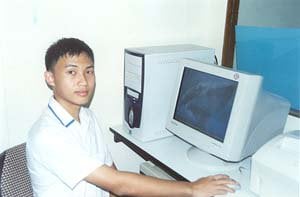 PHUKET TOWN: A Phuket student has been chosen as one of the four computer science students to represent Thailand in the International Science Olympiad competition, to be held in Wisconsin, USA, in mid-August. Nawanol Theera’ampornpan, an 18-year-old student in Mattayom 6 at Phuket Wittayalai School, will join between 600 and 800 students from more than 100 countries in the event. He told the Gazette that he’s been interested in computers since he was young. “My father is interested in computers and he’s been teaching me since I was six years old,” he said. “I first heard about the Science Olympiad in May 2001 when I was studying in Mattayom 4,” he explained. In October that year, he joined a “camp” organized by the Ministry of Education’s Sciences and Technology Teaching Support Institute (STTSI) to try to win a spot. He reached the top 24, but failed make it into the Olympiad. Last year he tried again, and this time he programmed his way into the top four. He will join 19 other Thai students at the event, which includes competitions in computer science, physics, mathematics, chemistry and biology. K. Nawanol’s father, K. Rungroj, said his son earned his place by writing a computer program to solve various problems, such as finding the best way to drive from one point to another through a traffic jam. His teacher, Jakkrit Siriwat, Head of the Information and Computer Center of Phuket Wittayalai School, is proud of the achievement of his “upcountry” student. He said, “In the past, students in other provinces couldn’t compare with students in Bangkok.” To address the problem, Ajarn Jakkrit opened a computer course last year, which about 50 students have joined. K. Nawanol’s efforts have done more than give him a chance to compete in the Olympiad – he has also earned the opportunity to study at any institute or university that accepts him. “My son will get a scholarship from the STTSI to study at the bachelor’s, master’s and doctor’s degree levels in computer science,” said K. Rungroj. “He hasn’t yet decided where he will study, but a favorite is MIT.” It’s not the first time a Phuket Wittayalai student has reached such heights in science. In 2000, Utane Sawangwit was a national representative at the Olympiad in physics. He is now a first-year student in the physics department at Cambridge University, England.