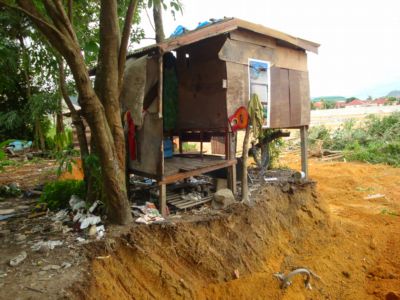 WICHIT, PHUKET: More than a hundred angry Phuket residents took to the streets last night to protest against a new housing development which they say will make them homeless.

Panason City Village is a modern housing complex being built on 78 rai next to Soi Thep Anusorn off Chao Fa East Road in tambon Wichit.

A number of the protesters have lived in the area for the past decade, but have no title deeds for the land their homes occupy.

Development began in March, with excavators clearing large swaths of land in preparation for the new village complex.

But workers had to stop in their tracks in front of the homes of residents who refused to leave.

One home in particular is now precariously balanced over a precipice created by developers.

“We have not been given enough time to leave our homes. They are trying to drive us out without proper warning,” Kasinee ‘Ee’ Sae-eu, a local leader said.

Ms Kasinee claimed the owner of the land had ‘tricked’ some of the villagers into leaving their homes.

The landowner offered at least 20 families 20,000 baht compensation for their homes if they would leave, she said.

“The families accepted the offer, but when they moved out they never received the money,” she said.

Ms Kasinee said the villagers had been told by police they were not the owners of the land and would have to leave.

“It’s a sad situation, we have been living here for more than 10 years and then all of a sudden we are just expected to leave,” she said.

Ms Kasinee said the villagers were determined to stay, no matter what.

“The protest will continue until the project owner puts everything back the way it was,” she said.