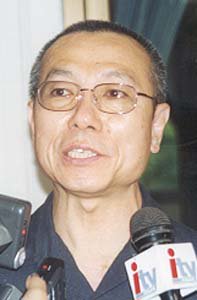 PHUKET: Thirty officers from the Agriculture Land Reform Deoartment (ALRD) in Bangkok started checking SorPorKor 4-01 land occupation papers this morning, and are expected to take about a week to compile a summary of their findings. Adisak Srisappakij, Permanent Secretary of the ALRD, told the Gazette after meeting with Governor CEO Pongpayome Vasaputi that the 30 officers would check all of Phuket’s 515 SorPorKor titles and report back to the special government committee set up under Deputy Prime Minister Chavalit Yongchaiyudh. “We will check that all the people holding SorPorKor papers qualify to occupy the land or are farming it. Before we came, we devised a system to ensure that all the papers would be examined according to the same criteria. “Anyone with a SorPorKor who is genuinely farming the land has no need to worry. “But if we find that they are not using the land for farming, their papers may be canceled, in which case they must leave the land. If they refuse to move, we will take legal action against them,” K. Adisak said. “We will check the condition of each of the pieces of SorPorKor land, and will speak to as many of the land occupiers and their neighbors as possible. I don’t think we will be able to talk to all of them, but we will check every piece of land,” K. Adisak added. He said that the ALRD had also considered checking tax records of SorPorKor holders, but that privacy laws made this difficult. The ALRD would be checking with the Revenue Department to see if it was possible. (Tax records would indicate whether SorPorKor holders were genuinely poor people who derived most of their income from farming.) “If we find any property projects on SorPorKor land, that will definitely be a contravention of the law, but I think this is unlikely. Any property or resort developer wants to be confident that there is no problem over the title to the land he is investing in. “In addition, before starting construction, developers must apply for permission from the local tambon administration organization, and that requires all the correct papers,” K. Adisak added. He said that in some cases in other provinces where SorPorKor had been taken away from one person and allocated to another, the original holder of the paper had refused to let the new holder work the land. “In cases like this, it usually involves influential people – the kind of people the government is now trying to crack down on,” K. Adisak said. “Where we find that we don’t have the power to move them out, we will contact officials in other sections of government to help us.” He stressed that it was his belief that the investigation in Phuket was “not political game-playing by the government”. He pointed out that the ALRD had been planning checks in Phuket for several months, but the recent Cabinet meeting in Phuket had put the investigation in the limelight. “We are here to look at the facts alone. Decisions on what should be done in any particular case are another step in the process, which does not involve the 30 officers who are in Phuket now.” Gov Pongpayome told the Gazette that he had told K. Adisak that few people in Phuket were interested in farming. Most wanted land in order to develop it. In addition, much of the soil in Phuket was not suitable for agriculture. “Most of the SorPorKor land is on hillsides and is difficult to farm,” the Governor said. “I suggested that SorPorKor land that is not appropriate for agriculture should be handed back to the Forestry Department.”