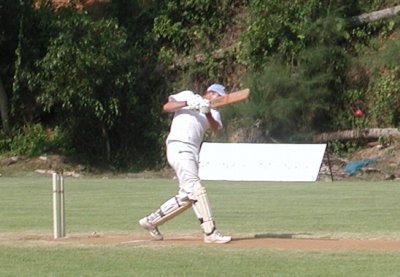 KARON: Lamma CC from Hong Kong are hot favorites to win the Montpelier Phuket International Cricket Sixes 2007 after beating 2005 champions and pre-tournament favorites Corner Tigers from Pakistan in the first day of play yesterday at the recently returfed Karon Stadium.

Round 2 of the tourney was played today under a scorching Phuket sun, with both Lamma CC and Corner Tigers through to the Cup and Plate playoffs tomorrow.

The playoffs for the finals tomorrow will start with first ball at 9 am as local side Green Man Gunnas take on last year’s champions Perth Postels.

Tonight under floodlights will be a charity match with a team led by former Former Australian Test player Trevor Chappell up against a side skippered by South African Kenny Jackson.

Proceeds raised from the match will go to local charity Child Watch.