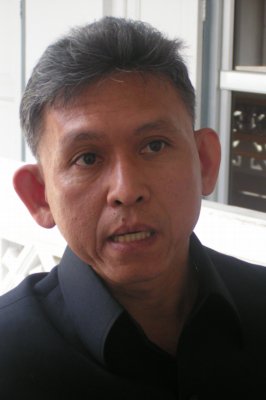 PHUKET CITY: A representative from the National Economic and Social Development Board (NESDB) met Phuket Governor Niran Kalayanamit today to discuss a wide range of development issues facing the island.

Thanin Pa-Em, Director of Competitive Development Office of the NESDB, explained that he was in Phuket to review and follow up on projects supporting development of the island, such as projects that support development of the Meetings, Incentives, Conventions and Exhibitions (MICE) industry, marinas and transportation systems.

“We are not gathering new ideas, we just want to be sure projects will be followed up, and how the NESDB can assist with local problems identified,” he said.

K. Thanin added that the reshuffling of top brass in Bangkok has led to delays in projects being approved. “Many projects have not been approved by the central government, but that doesn’t mean we are not paying attention. It’s because there have been changes in the government. Every time they change the ministers, the priorities change,” he said.

Local feedback was also a priority during his visit, K. Thanin said. “We want to see if people throughout Phuket want the same things and have the same opinions.”

He added that the NESDB understood Phuket’s problem of underfunding from the central government, and the NESDB is prepared to start addressing the issue.

“The budget allocation from the government is not enough because the allocation is according to number of people registered [as living on the island], which is very little. The budget is not as much as we need, which we will discuss,” he said.