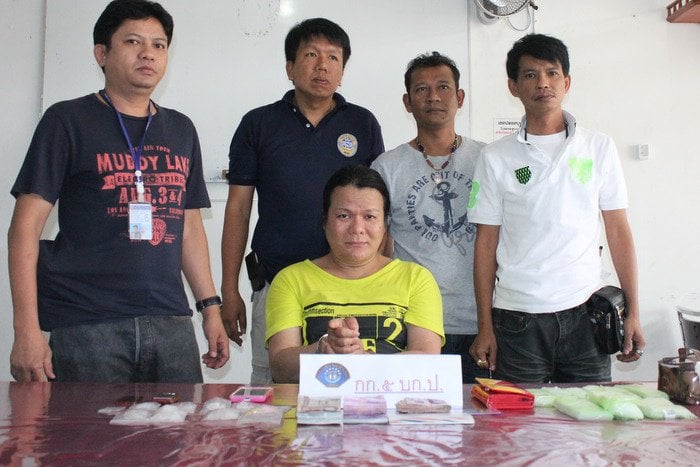 PHUKET: A ladyboy drug dealer in possession of 58.48 grams of ya ice (crystal methamphetamine) and 145,000 baht in cash was netted in a sting operation this morning in Phuket Town.

Police were informed by undercover officers that Thiwa Saengreung, 38, had been selling ya ice to teenagers in the area, said Lt Col Chaiyadej Kaiyarit, an inspector for the Crime Suppression Division 5 of the Central Investigation Bureau, which has jurisdiction in Phuket.

“We sent in an undercover officer to buy drugs from Ms Thiwa at her rental room on Mae Luan Road,” Lt Col Chaiyadej told the Phuket Gazette.

Once in custody, Ms Thiwa told police that she had bought the drugs from a man who police named only as “Mr Fuse”.

“We then had Ms Thiwa set up an appointment with Mr Fuse outside of a 7-11 convenience store in Baan Kuku,” Col Chaiyadej explained.

“Unfortunately, as soon as our team started moving toward the car, Mr Fuse fled the scene,” Col Chaiyadej said.

“Ms Thiwa was sent to Phuket City Police Station and will be charged for possession of a Category 1 drug with intent to sell,” he said.