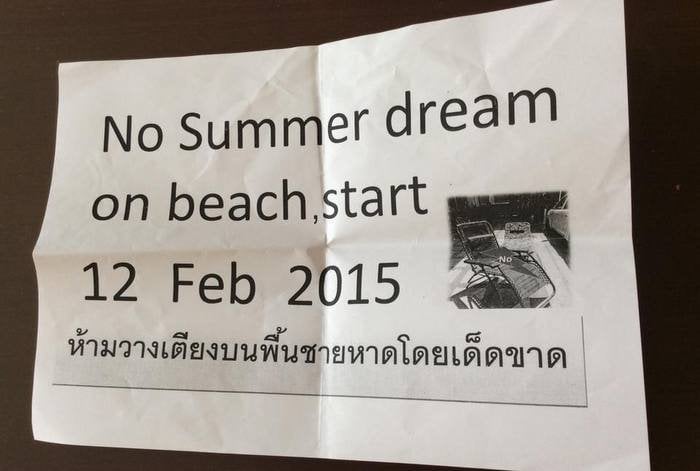 PHUKET: Police are rushing to fix fliers that were handed out to tourists at Patong Beach yesterday that mistakenly read in English “No Summer Dream On Beach, Start 12 Feb 2015”.

“It was a translation error. The A4 flier was supposed to say something that would mean ‘no beach loungers’, as it did in Thai below the English translation,” Deputy Superintendent Akanit Danpitaksat of the Patong Police told the Phuket Gazette today. “Instead ‘beach loungers’ was translated as ‘summer dream’.”

Lt Col Akanit apologized for the misunderstanding and any inconvenience caused by the error.

“We are so sorry for the mistake and will re-write the warning as soon as possible,” he said.

The fliers were intended to clarify to beachgoers that beach loungers and chairs were banned, but mats and umbrellas were still permissible.

“We wanted to make sure that everyone understood the new rules before we started strictly enforcing them,” Col Akanit said. “We don’t want to ruin tourists’ holidays by taking away their beach loungers, if they don’t realize that the chairs aren’t allowed on the sands.”

Without realizing the error, officers handed out fliers on Surin Beach today that said the same thing as those distributed to tourists on Patong Beach.

“Our officer handed the fliers out on Surin Beach to people who were bringing their beach loungers or chairs onto the sands,” confirmed Cherng Talay Police Superintendent Serm Kwannimit.

“We are not pressing charges against foreign tourists at the moment, but any Thais found breaking the rules will be charged up to 2,000 baht.”