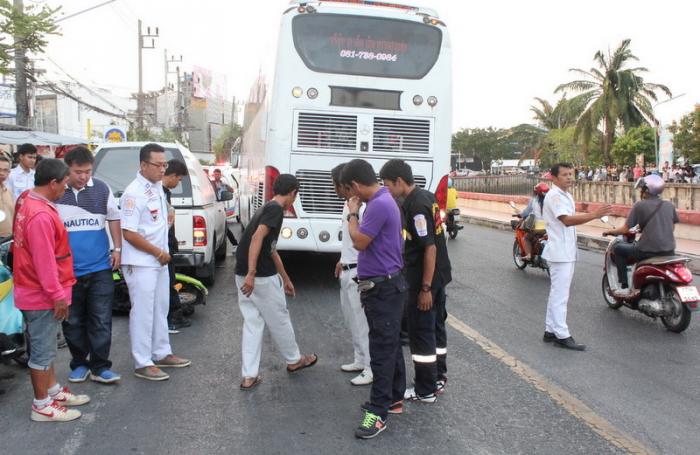 PHUKET: A Kusoldharm Foundation worker was killed yesterday afternoon after he crashed his bike and was dragged underneath a bus in Phuket Town.

Police found Sakpayom ‘Ajarn Jack’ Tarapong, 36, lying in the road near the rear wheel of a bus and a parked vehicle, confirmed Maj Somchai Nooboon of the Phuket City Police.

“According to the bus driver, Nukul Kaewthewee, 37, he had slowed down to avoid a parked vehicle, after which he heard people shouting at him to pull over because someone was being dragged underneath his bus,” Maj Somchai said.

The owner of the parked vehicle, Somkiet Tohhaem, 33, said that he had parked on the side of road and went inside a nearby store when he heard a loud crash.

“Mr Somkiet came out to see that a motorbike had crashed into the back of his pick-up truck,” said Maj Somchai.

“Ajarn Jack was loved by all of his colleagues. He worked for the foundation for eight year where he was also a swim coach,” a Kusoldharm Foundation colleague said.

Police have yet to press any charges in the case pending further questioning and recovery of CCTV evidence.