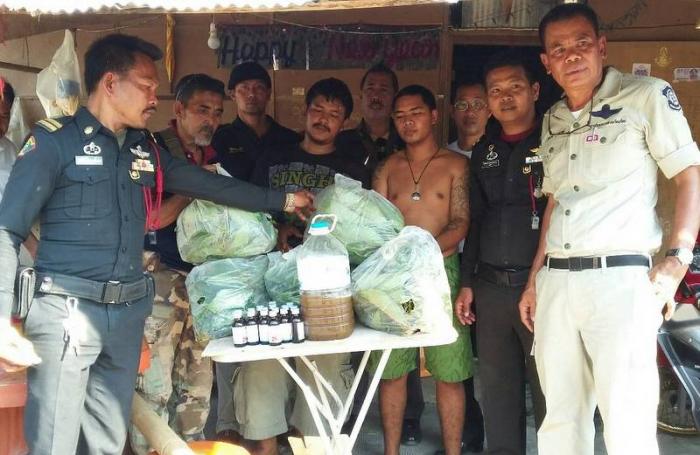 “We conducted a raid after receiving complaints from neighbors who suspected that they were selling drugs to teenagers in the area. We believe they have been doing this for a long time,” said Muang District Chief Administrative Officer (Palad) Sophon Suvannakarat.

The suspects were arrested with about 10 kilograms of kratom leaves, five liters of 4×100 cocktail (a kratom-based brew), 20 bottles of cough syrup and other drug paraphernalia.

“Two of the customers were high school students and one was a university student,” Mr Sophon said.

Police declined to provide the names of the customers.

All five dealers were charged with possession of a Category 5 drug with intent to sell. They confessed to the charges.

Police did not press charges against the customers, but said that they would be enrolled in rehabilitation programs. The students would receive additional punishment from their schools and university as well, Mr Sophon said.

The suspects revealed that they ordered the kratom from Nakhon Si Thammarat Province, while the cough syrup was purchased from a pharmacy in Krabi.

“We will use this information to broaden our base and make further arrests in the future,” Mr Sophon said.