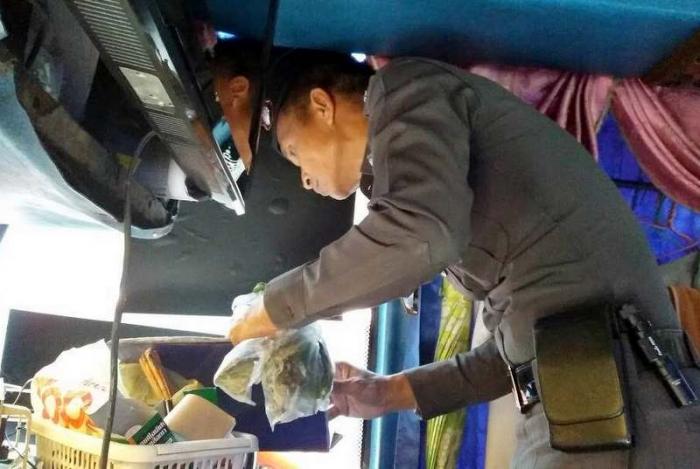 Peter De Balabander boarded the bus in Surat Thani and said he had asked bus staff to load his bags, but after arriving at Khao Sok National Park in Surat Thani and hailing a taxi to his rented bungalow, he realized that he couldn’t find his wallet.

Mr Balabander told Banroong Chanbamrrong, his taxi driver, about his predicament. Together, they followed the bus until it reached Baan Hin Dan checkpoint in Takuapa District, Phang Nga.

“We stopped the bus at the police control checkpoint in Phang Nga,” said Lt Col Chotipong Ketsarin of Taladyai Police. “Mr Balabander had asked us for help to locate his wallet.”

Col Chotipong told the Phuket Gazette that police officers asked the bus staff if they had found a wallet, but were told they had not found anything. Police then proceeded to search the bus.

Police told the two men to exit the bus and frisked them. The driver had 2,000 baht in his pockets and police found about 80 Euros stuffed into the driver’s seat.

“Our investigation discovered 72 Krathom leaves, 4,000 baht and Euros valued at about 3,040 baht,” he added. “Mr Balabander’s wallet was also recovered.”

Three men, including the driver, were arrested. Police reported that the men confessed to targeting foreign tourists along the Phuket-Surat Thani route.