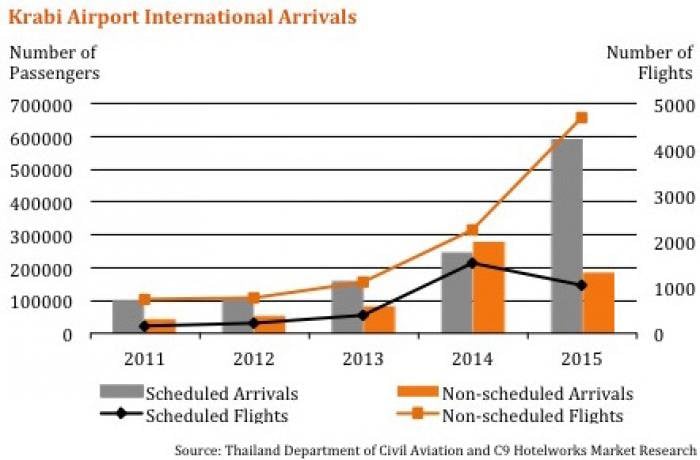 KRABI used to flip-flop between having a regimented high-season – catering to winter snowbird visitors from Scandinavia and Europe – and a low-season during which many hotels even scrapped breakfast buffets.

However, the latest research by C9 Hotelworks reveals skyrocketing airlift is edging the market towards being a year-round destination.

The C9 Hotelworks ‘Krabi Hotel Market Update 2016’ report reveals that between 2014 and 2015, passenger arrivals grew by a whopping 45 per cent. At the mid-year point in 2016, year-on-year arrivals were 13 per cent, but are expected to grow with the upcoming high season.

Fresh data from global hospitality giant STR shows a jump in occupancy of international-standard properties to at least 70 per cent.

“Two remarkable trends are apparent from the C9 Hotelworks report. First is the impact of growing airlift from Greater China with Krabi International Airport receiving 3,015 flights from the Mainland in 2015. Secondly, international passenger arrivals from China in terms of market share rose from 38 per cent in 2014 to 61 per cent last year,” said Mr Barnett.

“While Krabi is in the process of driving upward in its tourism cycle, growing pains are expected when you understand that registered hotel rooms in the market are close to hitting 20,000, but when you take a look at the incoming supply line, 70 per cent of these new hotels are mid-scale properties that are betting on the future of mass tourism. As nearby Phuket is learning, bigger is not necessarily better in the long run,” he concluded.

Another baby trashed, this time in a Patong trash can