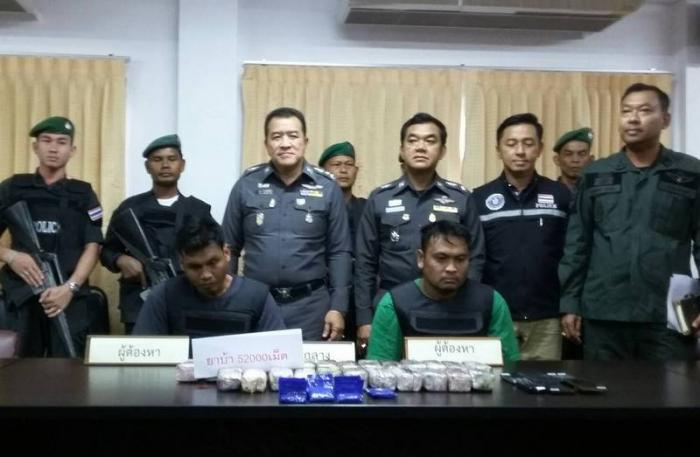 KRABI: A sting operation in Krabi yielded more than 10-million-baht worth of hard drugs and led to the arrest of two suspected drug dealers on Wednesday.

The two suspects were named as Amnat-ittirit Lueanloy, 34 and Yuthana Sangkachoti, 39. Both are from Nakhon Sri Thammarat. The operation was led by Region 8 Police Headquarters Commander Lt Gen Tesa Siriwato and his team.

“We seized 52,000 pills of ya bah (methamphetamine) from a pick up truck at a gas station in Khao Phanom sub-district,” Gen Tesa said.

“This was part of an ongoing investigation. On Monday, we arrested Piyarat Lanpok with 178 pills of ya bah. She told us that she bought the drugs from the two suspects, so we got her to arrange another meeting.”

The men were first caught with 4,000 pills of ya bah, but after checking their truck, police found 48,000 more pills stashed in the back.

Both suspects reportedly confessed and were charged with possession of Category 1 drugs with intent to sell. The suspects told police they had acquired the drugs from Nakhon Sri Thammarat to sell in Krabi.

“We will broaden the case and try to penetrate their network further,” Gen Tesa said.

Return of the Rajabhat roboteers [video]