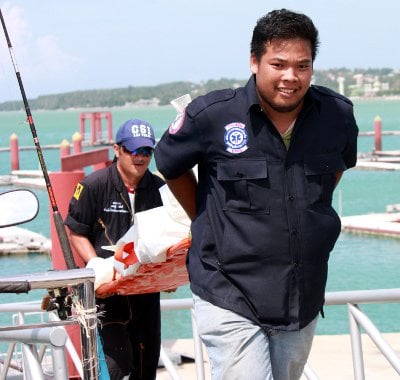 After the Phuket Tourist Rescue Center at Chalong Pier was notified of the discovery at 7am, they dispatched a speedboat marked as operated by the “Chalong Tambon Administration Organization” (now called Chalong Municipality) to the island, about 20 kilometers south of Phuket.

Members of the Chalong Police and Phuket Ruamjai Kupai rescue foundation also took part in the recovery effort, which saw the remains reach Chalong Pier at about 10:30am.

Rescue workers told the Phuket Gazette that only the torso had flesh remaining; the limbs and head had been reduced to bone. However, part of the body was still clad in underwear.

Given the state of decomposition, police estimated the time of death at about 15 days ago. Despite the advanced state of decay, they said they suspect the body to be that of a Thai man.

The body was transported to the morgue at Vachira Phuket Hospital for examination and storage.

Chalong Police initially suspected the body might be that of Suwit Suwannakij, a 25-year-old Koh Sireh resident reported missing during a night fishing expedition in the Koh Racha Yai area on July 21.

However, Jamba Songkaew, the 31-year-old aunt of the missing fisherman, ruled this out after examining the remains.

“My relative was fully dressed when he left, and I know this is not his underwear,” she said.

She explained that Mr Suwit and a friend left in the direction of Koh Racha Yai at about 2am on July 21.

The friend said he fell asleep aboard the vessel at about 3am. When he woke, around dawn, Mr Suwit was no longer aboard.

The friend called for help from a larger boat in the area and other vessels assisted in an unsuccessful search effort that lasted all day.

Since then, Ms Jamba has contacted all relevant agencies in an effort to try to learn the fate of Mr Suwit.

Anyone with information that could assist in identifying the remains of the body found today is asked to contact Chalong Police at 076-381247.