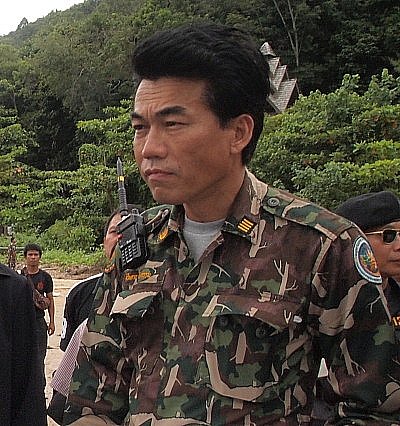 PHUKET: The investigation into every plot of privately owned land along the border of Phuket’s Sirinath Marine National Park will go ahead, the chief of Sirinath National Park has confirmed.

“We are still continuing with the land investigation. We are following the order of the Department of National Parks, Wildlife and Plant Conservation [DNP]. The only thing that can stop us is an official order from them,” Park chief Cheewapap Cheewatham told the Phuket Gazette.

The mass land probe aims to investigate 379 plots of land covering more than 3,000 rai along the park boundary.

“I have not received any official order from the DNP telling us to stop investigating the ownership documents of all 379 plots along the national park border.

“The only official order I have received from the DNP is to delay charging [anyone in connection with the] resorts and private homes that are suspected of being built on protected forest land until the land documentation has been verified. That order was issued by Prime Minister Yingluck Shinawatra,” Mr Chaweepap said.

The park chief explained that, according to a Cabinet resolution made on June 30, 1998, any plot of land that was issued a Chanote title before the area was declared a national park or a protected forest area was to be considered legal.

“However, any land that has been issued a Chanote after the area was declared a protected forest area will be considered illegal.

“That’s why the land documents of any resorts or houses that are suspected of being built in a protected forest area must be reviewed carefully again,” he added.

Mr Cheewapap said he had not received complaints about banks “losing billions of baht in investment” because of the investigation into encroachment onto national park land in Phuket.

However, Mr Cheewapap said he had yet to be informed of why there has been a delay in the arrival of the 366 DNP officers who will conduct the mass probe into plots along the park boundary.

“We have not yet started the investigation because we are still waiting for them. I have no idea when the teams are going to be here. The DNP might have delayed their arrival on the island until after they have reconfirmed the exact location of the national park boundary,” he said.

Matthieu Ricard, “happiest person in the world’, to speak in Phuket today