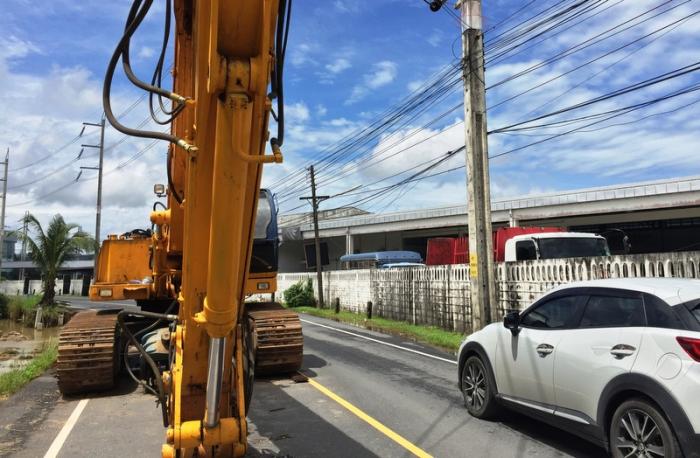 PHUKET: Construction work to widen a waterway and build a retaining wall along Soi Koh Kaew 33, behind the Isuzu showroom on Thepkrasattri Road, has been delayed due to a “mistake” in the setting the wall’s pilings.

The 8.4-million-baht project to build a three-meter-high retaining wall along a 500 meter stretch of roadside was initially scheduled to be completed by October. However, backhoes and other construction equipment has been left on the road following the “temporary” halt in construction.

The project is jointly funded by Muang District, the Phuket Public Works and Town & Country Planning office, and the local OrBorTor. Officials said they are urging the construction company to solve the problem quickly as it is now far behind schedule and creating major problems with traffic flow in the area.

“We are working hard to finish the work ‘as soon as possible’, but cannot say how long the delay will be. The construction company will be fined for the delay,” he claimed.