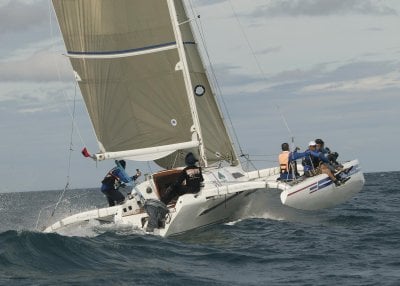 PHUKET: Strong winds gusting up to 20 knots sent boats flying across the water from Kata out to Koh Racha and back in today’s racing in the King’s Cup Regatta.

The hefty gusts saw two collisions, happily with no injuries.

The lovely 100-year-old Eveline was retired after her stern was damaged when was she clipped by Lady M, a 104-foot superyacht.

Platu Yachtpro 106, racing in the Sports Boat class, was also retired after suffering severe damage in a collision with Master Blaster, a Sun Kiss 47 with an all-Russian crew, which was disqualified from today’s race.

Yachtpro 106 reportedly sustained a hole in the deck and hull, and a broken boom. Rob Williams, Managing Director of Yachtpro, confirmed that the boat will not race tomorrow, and may possibly be out of the regatta altogether. “We’ll just have to wait and see,” he said.

Drumstick finished in fourth place, behind Mandrake in second place and Boracay, which finished third.

Royal Thai Navy 1 stayed on top of the table in IRC 2 with a win today, ahead of La Samudra, which finished second, and Royal Thai Navy 2, which came third.

Pla Loma‘s win in the Sports Boats class was still not enough to take it into the top three for the series. Yachtpro 106, although retired, was awarded “average score” for the race, giving it a second-place result and keeping it afloat at the top of the series table.

Moto Inzi has a comfortable five-point lead in the series ahead of Coco Blues and Cedar Swan in equal second place on nine points.

Raimon Land Chameleon sailed well to win the Multihull 2 race by just nine seconds on corrected time, ahead of Charro and Running Cloud.

Today’s win elevated Chameleon to second place in the series, with Chimera in first place and Charro third.

The other series rankings so far are: