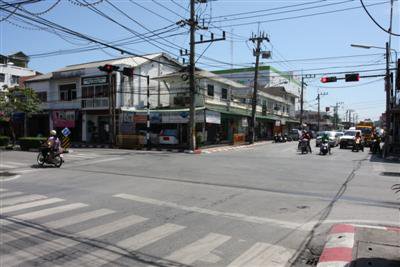 PHUKET CITY: A 14-year-old boy is in police custody after a one-day crime spree that included breaking and entering, burglary, a bungled carjacking of a British tourist – and twice shooting an officer on duty.

Phuket City Police received a report at 11pm on Monday that a patrol officer had been shot at the busy Bang Neaw intersection in downtown Phuket City.

When they arrived at the scene, wounded officer Senior Sgt Maj Teerasak Tongnun had already been rushed to Vachira Phuket Hospital for treatment, with two .22 caliber bullet wounds to his left hand.

Phuket Provincial Police Commander Apirak Hongtong ordered one team of investigators to question the fallen officer, while others fanned out to look for the shooter.

Less than an hour later, police led by Lt Col Pravit Suthiruengaroon arrested a 14-year-old boy from Udon Thani at a rice porridge shop at Surin Circle, less than a kilometer from where the shooting took place.

According to the police, the boy was employed as a builder and had that afternoon been working inside the home of a teacher at Srisuchart Grand Ville, off the bypass road in Rassada.

The youth, who arrived in Phuket from Udon Thani two months ago, left the home after finishing his work and was waiting outside for his uncle to pick him up when he noticed the teacher leave.

He seized the opportunity to break back into the home and stole the .22 Walther and a one-baht weight gold necklace, which he then went off to sell for about 13,000 baht.

Cash in hand, he headed downtown to do some shopping and bought himself a new mobile phone and some clothes.

As he passed the Bang Neaw Shrine he noticed a British tourist and his Thai girlfriend about to get into a Bangkok-registered Honda Civic.

At gunpoint, he ordered the couple to move away, hoping to flee in the car to Bangkok.

His getaway plan was thwarted when he realized that the British man, who had already retreated a safe distance, still had the car key in his pocket. The boy, gun in hand, then fled down Kra Road.

At this point, patrol officers Senior Sgt Maj Teera and Senior Sgt Maj Suppawat Kwankaew arrived on a motorbike and called the boy over for questioning.

The boy shot at the officers three times, hitting Sgt Maj Teera twice in the hand and causing the bike to crash.

The boy managed to escape and fled on a motorcycle taxi, but he was eventually apprehended at the rice porridge restaurant.

The youth, wearing shorts and T-shirt at the time of capture, faces a host of charges in Juvenile Court, including attempted murder of an on-duty police officer, resisting arrest, theft, attempted car theft and weapons violations.

The shooting took place in the same area where an 18-year-old McDonald’s employee was stabbed the night before. For details of that story click here.