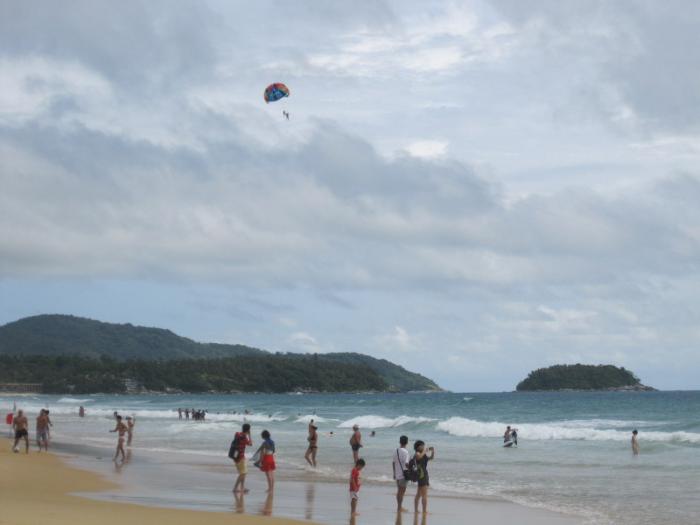 PHUKET: Despite all the recent reports of waste water, including human waste, flowing across it, Karon Beach was recently named as one of the 25 best beaches in Asia by TripAdvisor.

Three other Phuket beaches were among the top 25 in the 2014 TripAdvisor Travellers’ Choice Awards: Nai Harn, Kata Noi and Freedom.

Nai Harn was in fifth place, Kata Noi in 14th, Freedom Beach in 16th and Karon in 18th.

With an additional four beaches in the south of Thailand also voted onto the awards list, the Land of Smiles’ beaches account for nearly a third of peoples’ choice votes for the best in Asia.

In their second year, the awards are “determined based on the quality and quantity of traveller reviews and ratings for beaches on TripAdvisor gathered over a 12-month period,” the website states.

Notwithstanding the black water scare, the new director of the Tourism Authority of Thailand (TAT) Anoma Wongyai said, “It’s easy to promote Phuket’s beaches because of their natural beauty.”

“Beacuse we have many beautiful beaches here, including those on nearby islands, tourists enjoy coming for their longer holidays,” Ms Anoma explained.

Phuket has long been recognized as one of the world’s top beach holiday destinations and continues to grow in popularity.

“Phuket saw an increase in the number of tourists in 2013 over previous years, with more than 11 million people visiting the island. Chinese, Australians, Russians, Malaysians and Germans are now the top five represented guests on the island,” she added.

Railay, Phra Nang, Koh Lanta and Koh Phangan are other Thailand beach destinations that have been voted among the best in Asia.

Phuket is receiving almost 100,000 Covid-19 Sinovac doses to administer second vaccine rounds to those who received their first jabs earlier this month. 99,480 doses were delivered yesterday at Vachira Phuket Hospital in Phuket Town. 30,000 doses will be delivered to Thalang Hospital, 20,000 to Patong Hospital and 10,000 to Chalong Hospital. Vachira hospital’s director posted last night detailing the vaccines’ distribution, noting that Vachira will keep the rest in store.

The vaccine doses will help continue the mass-vaccination campaign which will continue until April 30. About 90,000 people and 9,000 medical and public health personnel are scheduled to receive their 2nd vaccine doses. 480 military, police, and frontline personnel are also on the list.

The Phuket Provincial Health Office has made a goal of inoculating 8,000-9,000 people per day, but many have criticised that number as being unachievable. Chalermpong says SMS services will be used to notify those of vaccine appointments.

“Those who already have had the first injection will receive an SMS for an vaccination appointment on their phones. The SMS will tell you the date and time you have to come to the vaccination stations. For those who are waiting for vaccination in May, we will inform you later.”

The Phuket News reports that people who have already had their first injection but who have not received an SMS confirming the second vaccination appointment can check at the “Phuket Must Win” website. Chalermpong says if you cannot find your name, then you can visit the vaccination station and present your certificate to staff after 3pm each day.

Other provincial authorities joined in giving their advice with the PPHO chief reminding that even if you are vaccinated, you could still be infected, but the symptoms won’t be very bad. The Vice Governor also chimed in saying if you want the first injection, they are open for registration today. But if you want to be vaccinated in May you must have an appointment as authorities are trying to reduce congestion.

Meanwhile, Phuket’s plans to reopen by July to vaccinated tourists may be stalled due to the 3rd wave of Covid and a slower rollout of vaccine administration than previously planned. New restrictions from entering the province have also been announced. Currently, you’ll need either a certificate of proof that you’ve had both doses of an approved Covid-19 vaccine, a Covid-19-free certificate, not older than 72 hours, or you’ll have to do a Rapid Covid Test at a cost of 300 baht at the airport.

This situation will apply until at least the end of April. The downside of coming to Phuket at this time will be risking a positive Rapid Covid Test, if you don’t have the other paperwork, and ending up in a field hospital.

If you’re arriving in Phuket by road, through the Thachatchai road checkpoint at the top of the island, only travellers from the red zone provinces will be affected by the new restrictions. If you’re from an orange zone you’ll be able to enter without the paperwork, for now anyway.