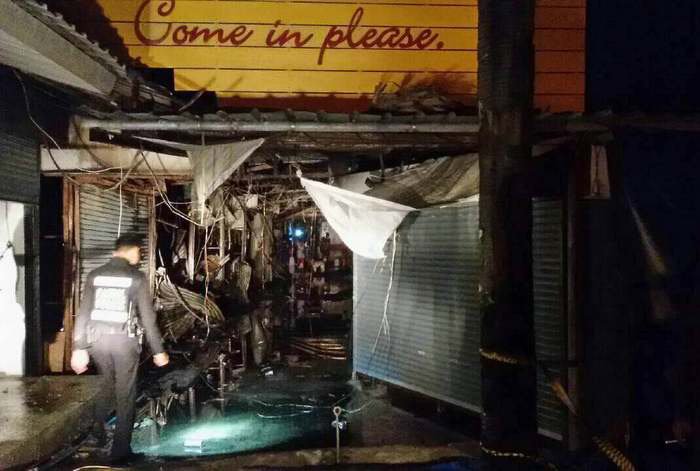 PHUKET: Police are investigating the cause of a blaze at Karon Plaza that engulfed 10 shops along the Karon beachfront road last night.

Five firetrucks from Karon and Patong were called to the scene at about 11:50. It took firefighters about 40 minutes to extinguish the flames.

“Luckily, the stores were closed and nobody was injured,” said Lt Weerayuth Thansirisukhaworakul of the Karon Police. “The shops contained consumer goods like bags, shoes, clothes, sunglasses and other items for tourists.”

According to a witness, the fire started in unit number three. However, the flames quickly spread to nearby shops. The alleged origin of the fire is the same unit that caused a fire in Karon Plaza in 2013 (story here).

“The shop owners have yet to estimate the cost of the damage caused by the fire,” said Lt Weerayuth. “We will call in experts and investigate the cause.”