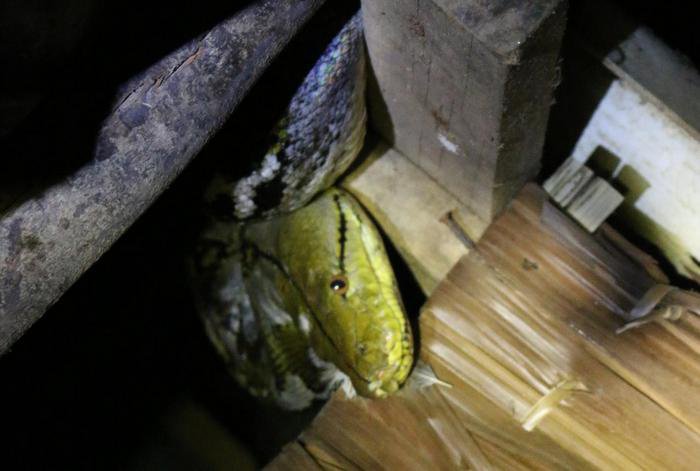 PHUKET: A 30 kilogram python was caught midway through gobbling up a chicken in Phuket earlier this week.

“It was about 2am when we woke to the sound of our chickens causing a ruckus,” Wisit Powikit told the Phuket Gazette. “It was strange, so I went to investigate.”

Mr Wisit owns about 10 chickens that he keeps in a henhouse behind his home.

“Inside the henhouse, we found a huge python with a half-swallowed chicken hanging out of its mouth. When it saw us, it just stopped eating and dropped the chicken,” Mr Wisit said.

After arriving at the scene Kusoldharm Foundation rescue workers spent about 15 minutes trying to bag the snake.

“We were shocked to see a giant python enter our yard at this time of night. We were very lucky that it only killed one chicken and didn’t come into the house, which could have been dangerous for my family,” Mr Wisit said.

“I would like to say thank you to all my neighbors and rescue workers for helping us.”

“On average, we receive about five cases a day to catch dangerous animal. Dangerous animals can appear anywhere on the island, no matter what season it is. Please be careful. Just call us instead of trying to catch the animals yourself,” Mr Sakun Naepnean, a rescue worker said.