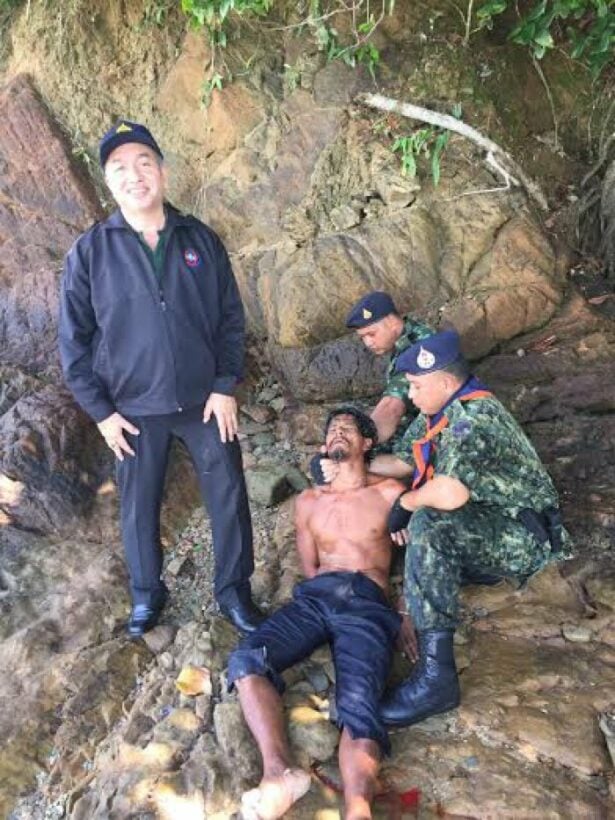 PHUKET: Police are hunting one more fugitive after catching an attempted gang murder suspect hiding out on a secluded island east of Phuket this week.

A 50-man raid of the island rooted out Danai Homhuan, 36, who had given away his position by firing warning shots at local fishermen earlier this year.

Mr Danai was wanted by Thalang officials for two prior cases: drug dealing in 2011 and attempted gang murder last year.

“Mr Danai is the head of a gang that was operating out of Phuket. We believe he was on the island with one more member of his group, while three members remain in Phuket,” said Thalang District Chief Veera Kerdsirimongkol.

“Now that we have him, it should be easier to bring in the rest to face justice.”

Mr Veera explained that Mr Danai had been evading authorities by laying low on Ngum Island since 2011. He had surfaced briefly as part of an attempted murder in October and then disappeared again, that is until earlier this week.

“We have identified the other suspect that managed to evade arrest when we raided Ngum Island, so we should be able to track him down quickly,” Mr Veera said.

Mr Danai was arrested on Wednesday in possession of a fire arm and matching ammunition.

In addition to facing previous charges, Mr Danai faces charges for the illegal possession of a firearm and carrying a loaded firearm in public without a permit.