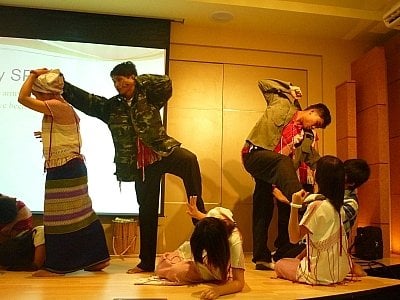 PHUKET: Nine-year-old Ywa Hay Tha never went on family trips to the beach; never saw his favorite films on the big screen; never got a chance for a “normal” life.

Nine-year-old Ywa Hay Tha was more concerned with keeping himself alive when he fled the Burmese military through the jungles of eastern Burma to the relative safety of the Umpiem Mai refugee camp in Thailand.

Now 18 years old, Ywa and 20 other ethnic Karen students of Thoo Mweh Khee (TMK) Senior College in Tak province visited Phuket last week for a cultural exchange after a “What if” conversation between a Satree Phuket School teacher and the director of TMK became reality.

TMK director Dr Shirley Worland said that the idea was inspired during a “silly conversation” with Satree Phuket social studies teacher Joey Ho, on her last day of a short volunteer stint with TMK.

While talking about the students’ travel restrictions, Dr Worland asked, “Wouldn’t it be fun if we could get the kids down to Phuket?”

In what was a surprisingly smooth process, the group was issued a letter from the Tak Provincial Government permitting them to travel outside the province, based on a letter of invitation signed by the director of Satree Phuket, Kiattisak Pillawat.

The 21 students and several teachers, along with Dr Worland, arrived in Phuket last Sunday after a two-day drive from North Thailand.

All in their late teens and early twenties, the students have been experiencing a lot of “firsts” since setting foot onto the island.

On Monday, the group visited Satree Phuket School for a cultural exchange with Thai students – the first time many of them had ever interacted with their Thai peers despite having lived in Thailand for many years.

Ms Ho explained that she had earlier taught her social studies class about the situation along the Thai-Burma border, where hundreds of thousands of people have fled the Burmese military.

“That’s why when Shirley mentioned bringing the students down here, I thought it would be a great idea for them to actually meet these kids,” Ms Ho said.

She said that some of her students were so moved by the lesson that they took it upon themselves to make a donation box to raise funds to bring the Karen students to Phuket.

When they were asked to leave a local shopping center for soliciting funds without a permit, they stood outside in the heat trying to collect whatever they could, she said.

At Satree, the group was very impressed with the students and facilities.

They sat in on classes, participated in question-and-answer activities, gave a PowerPoint presentation and performed a drama they had written, based on their own experiences, with scenes detailing the violence and persecution they faced in Burma, their subsequent “run through the jungle” and arrival in Thailand.

On Tuesday, the Andaman Sea Club Co provided two catamarans, free of charge, for the students to get their first taste of sailing. The boats took the group to Koh Lone for a day of swimming and hanging out on the beach.

“This is the first time for me to see the ocean,” said 20-year-old Mary Win.

“Sailing was great. I felt like I was flying,” she added.

In fact, this was the first time most of the students had been to the sea.

“I like swimming because I’ve never been to the sea before, and also sailing – it was very good. I felt very comfortable with the wind blowing on me,” Ywa said.

On Tuesday evening the students joined the hordes of international shoppers at Phuket’s Central Festival, where they were treated to their first big screen experience. They watched The Green Hornet and then hit Burger King for their first fast-food experience.

Ms Ho said Karen reviews of Burger King were mixed, as the group are accustomed to a meatless diet because meat is too expensive. The film, however, got a unanimous thumbs-up.

The Secret Cove Guesthouse & Villas on the beach at Ao Yon provided free accommodation and meals for the group.

Owners Rik de Jong and Duangta Namsai hosted several fund-raising events, including a barbeque and beach parties, which paid for the majority of the trip.

“Without Rik’s generosity and efforts, this would not have been possible,” Ms Ho said.

“I am still quite emotional about the whole thing and still pinching myself to see if it’s real. This morning [Wednesday] I got up at 6:10 – quite a few of them were out walking at low tide, out to the coral – mostly one-by-one – just so amazed at the shells and small fish. They have collected hundreds of shells,” said Dr Worland.

The students are all part of either a two or three-year program at TMK Senior College, depending on their level of English.

TMK is part of the larger Migrant Learning Center, which is registered as such with the Thai Ministry of Education.

Most of the students come from families of migrants who are fleeing persecution in Burma’s troubled ethnic states and are not registered as residents in Thailand. They are therefore unable to attend Thai schools.

There are several schools for Burmese migrant children along the Thai-Burma border, and highly concentrated in Tak Province.

The students aim to take the General Education Development (GED) tests, which if passed show that the student has American or Canadian high school-level academic skills.

Many hope to pursue further education after leaving TMK, but the lack of funding often prevents them from doing so.

Ywa and Mary will be the first two students to graduate from the TMK program and both hope to find a way to study at university so they can help with social development and childhood education in their communities.

TMK is entirely dependent on private donations for day-to-day costs and Dr Worland hopes they will be able to raise enough money for a scholarship fund.

Anyone wishing to donate to the school or to help students like Ywa and Mary fulfill their potential can do so by contacting Dr Worland via email at shirleyworland@gmail.com.